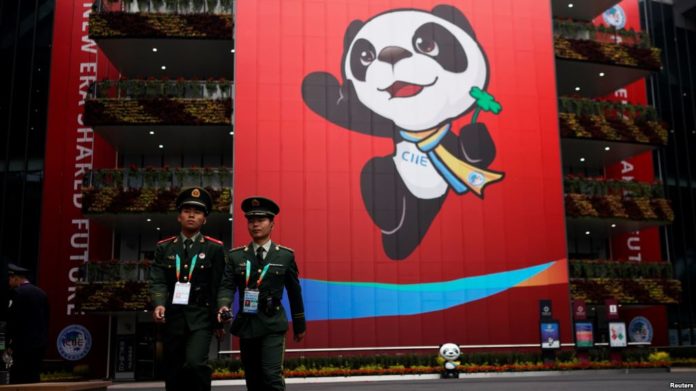 SHANGHAI: German carmaker Volkswagen signed what looked like a meaty deal with one of its China joint ventures this week at a huge new trade show in Shanghai to ship almost $9 billion worth of cars and parts to China next year.

But it turns out the “Memorandum of Cooperation”, one of the hundreds of deals inked at the China International Import Expo that wraps up on Saturday, represents business as usual for VW.

Two sources close to the company and its FAW-Volkswagen tie-up said the joint venture would have imported the cars and parts with or without the expo to support its day-to-day manufacturing and sales operations, as it does every year. FAW-Volkswagen did not have an immediate comment.

While the giant import fair is a key part of China’s response to growing complaints about its commercial policies, critics said the tightly choreographed event was more show than substance that failed to address core issues at the heart of the festering US-China trade war.

“I don’t think we’re holding out high hopes for the expo in terms of improving China’s trade relationship with the rest of the world,” said Duncan Innes-Ker, regional director for Asia at the Economist Intelligence Unit. “People really want to see a generalized improvement in the fairness of the operating environment, not a specific commitment to importing more in this particular year or whatever.”

State media has lavished praise on the event, which was headlined by President Xi Jinping, who provided few specifics in his opening speech about how China would address complaints on issues like market access and intellectual property rights protection.

“The Shanghai expo will act as a demonstration before billions of global observers that China is letting the market play the decisive role in its business operations,” the local newspaper said.

The expo’s organizers were less laissez-faire, and the heavy hand of the state, from stifling security to pressure on state-owned enterprises to do deals, was ever-present.

Schools were closed across Shanghai, a city of more than 24 million people, on the first two days of the expo and cars without special passes were blocked from approaching the enormous clover-shaped exhibition hall.

Inside, guards and police blanketed the venue and lined walkways to and from the subway. Participants were required to undergo airport-level security and a long list of items, from daggers to Frisbees, were banned.

“I’m not sure what they are trying to protect with all of this security,” one foreign industry VIP said.

Hundreds of student volunteers in red blazers offered directions around the venue, which boasts an exhibition area roughly the size of 40 football pitches and a multi-story maze of roads, meeting rooms, offices and restaurants.

One journalist clocked more than 17,000 steps of walking at the expo in one day or roughly 12 km.

Many of the deals touted at the fair, like Volkswagen’s, appeared to be either business agreements that would not ordinarily warrant publicity, or the announcement of previously agreed contracts, according to executives.

After one signing, a foreign participant said that he had nothing to do with the company he was representing.

“Everything you saw at the signing ceremony was theater or farce. I’m essentially an actor, hired for the duration of the expo, in order to give the impression of international cooperation,” the person said, asking not to be named.

Chinese companies have been known to hire foreigners to impersonate executives at events, presumably to lend an air of international legitimacy.

Two people involved in the signings said the deals were non-binding “memoranda of understanding”, or letters of intent, with existing partners. CNOOC executives declined to provide details.

“For us as a global company, any signal that promotes free trade and global collaboration is highly appreciated and welcome, and this platform was used for that purpose,” he said. “In the old days, these kinds of exhibitions and trade fairs were used to sign deals. But now you do the deals through e-commerce and you don’t need trade fairs for that.”

The strategy for some of the more than 180 American companies at the expo seemed to be to wait and see.

“We will continue to do what we are doing and hopefully that will resolve itself between both of our governments,” said Henry Irizarry, a vice president at Jeanerette, Louisiana-based Metal Shark Boats, referring to the China-US trade war.

At the media center, a robot on wheels named ‘Xiao Bao’, or Little Leopard, scooted to and fro, showing reporters to the bathroom and answering basic questions.

Asked where Xi Jinping was, Xiao Bao could give a rundown of news of the day involving the Chinese leader.

It was unable to respond when asked multiple times how the China-US trade conflict could be resolved.