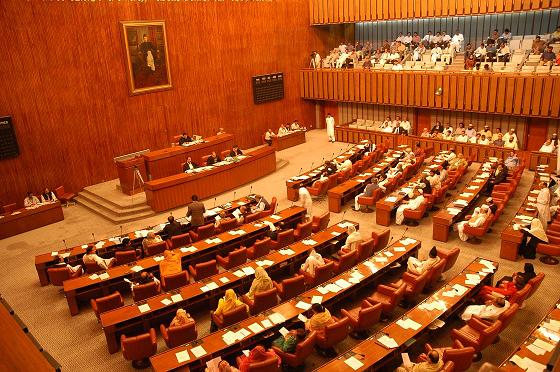 ISLAMABAD: The government on Monday apprised the Senate that the hurdles had been removed in executing its reforms agenda since the threat of the balance of payment crisis had been avoided.

While concluding discussions regarding the loans obtained or being contracted by the government, Minister of State for Finance Hammad Azhar shared there was an immediate balance of payment crisis, when the current over came into power, reports Dawn.

Mr Azhar added the country was out of danger now due to a support package obtained from Saudi Araba and the pledge from China to plug the remaining gap.

He shared the modalities for the assistance to be received from China were being worked upon.

The State Minister for Finance revealed data of 96,000 offshore account holders from Pakistan in 27 countries had been accumulated, whilst data from another 13 was awaited.

And regarding the Panama Papers, Mr Azhar told 444 Pakistani people having bank accounts overseas had been identified.

He said 242 of them had not been proceeded against due to their cases being ‘time-barred.’

Moreover, Mr Azhar informed the Senate that proceedings against another 150 couldn’t be taken due to incomplete data.

Also, Mr Azhar stated the government was working to improve the definition of economic indicators to ensure stunts in economy and accountancy to an end.

While talking about the government’s plan to supply gas and electricity to textile and other sectors, Mr Azhar said Pakistan was competing with exporters from India, Bangladesh and China.

He added, “They will be offered concession on a par with the regional competitors.

Mr Azhar stated the exports had witnessed a growth of 4.6%, whilst imports had decreased.

“We do not believe in deficit finance growth. It is not appropriate to mortgage your strategic assets. An economy can only be run on the principles of economy,” he said.

On the other hand, Petroleum Minister Ghulam Sarwar Khan rebuked the previous PML-N administration for reaching a long-term contract of 15 years for LNG import, with a suspicious clause due to which the agreement would remain classified for three years even after its conclusion.

Mr Sarwar added the government was concentrating on exploration and open bids would be invited for ten blocks soon, highlighting a new petroleum policy would be announced next year.

The Petroleum Minister stated boards of all companies under the petroleum ministry from every province would have representation.

What’s the mini budget all about?