Amid rupee depreciation, PM asks business community not to panic 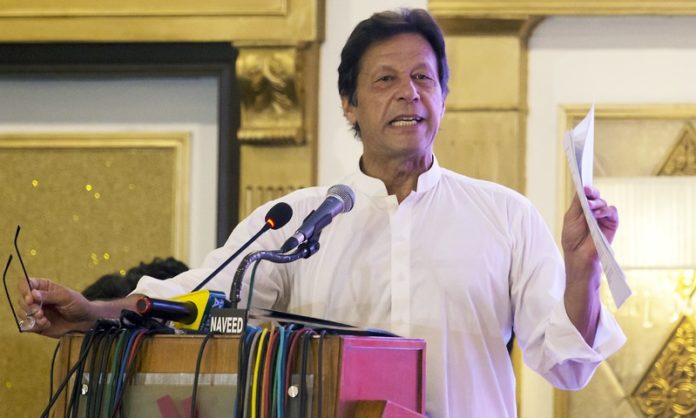 LAHORE: Keeping in view the growing outcry on the devaluation of rupee, Prime Minister (PM) Imran Khan on Saturday asked the business community not to worry.

Speaking at the Lahore Chamber of Commerce and Industry (LCCI), the PM said that the foreign investment was pouring into Pakistan owing to its geo-strategic position, business-friendly policies and the government’s anti-corruption efforts.

He said Suzuki was bringing in an investment of around $450 million, Coca Cola $500 million, Pepsi $800 million, and Fonton, a Chinese car-making company, was investing $900 million to set up a car manufacturing plant.

“Exxon Mobil, a US-based and one of the world’s largest oil and gas companies, had re-entered Pakistan’s market for exploration believing that the country had gas reserves for 50 years,” he added.

He told the gathering that during his visit, the Malaysian companies had shown interest to invest in Halal meat market that was of Rs2,000 billion worth industry in the world.

The prime minister, who was accompanied by his Adviser on Commerce Abdul Razak Dawood, said the government was taking four measures to resolve the current economic situation.

Firstly, he said, the government was extending all-out support to exporters to enhance the country’s exports and help bridge the current account deficit. Secondly, he added, the overseas Pakistanis were being given incentives to send remittances through banking channels that could enhance the volume by $10 billion.

Thirdly, the government was striving to attract foreign investment as the world was eyeing Pakistani market owing to its attractive geo-strategic position and acknowledging the government’s anti-corruption drive, he said.

Fourthly, the prime minister said the government was getting tough on money laundering and would make legislation next week to clamp down the perpetrators. Currently, around $10 billion were laundered from Pakistan annually, he added.

He recalled that the policy of industrial nationalization had hurt the country’s economy in 1970s. “The wrong policies in the past had also encouraged smuggling and begot deindustrialization in the country; however, the incumbent government was fully incentivizing the investors,” he added.

The prime minister said the government was trying to bring down the current account deficit before approaching the International Monetary Fund (IMF), if it required. The IMF package always put a burden on the people and increased unemployment; however, the friendly states like China, Saudi Arabia and the UAE had given a good response to Pakistan to cope with the situation.

Later, the prime minister also listened to the questions and suggestions from the business community and responded them too.