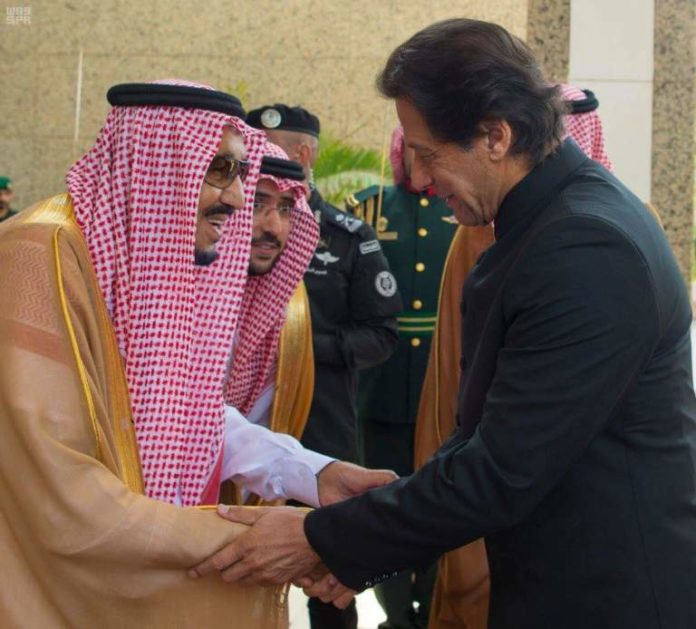 ISLAMABAD: Pakistan’s meagre foreign reserves were bolstered on Friday as the second $1 billion tranche was received from Saudi Arabia, the State Bank of Pakistan (SBP) has announced.

The country’s foreign exchange reserves now stand at $9.24bn, with the third installment from Riyadh expected in January.

Prime Minister Imran Khan visited Riyadh on the invitation of King Salman bin Abdul Aziz to participate in the Future Investment Initiative (FII) Conference in October. The kingdom had agreed to park $3bn in Pakistan’s foreign currency reserves for a year and establish a credit line worth $3bn for the sale of petroleum products on credit for three years.

“This arrangement will be in place for three years, which will be reviewed thereafter,” the Foreign Office had said.

Pakistan received the first tranche of $1bn in November.

The much-needed inflow came at a time when Pakistan and the International Monetary Fund (IMF) are negotiating a bailout package. The loan has improved the country’s capacity to pay for imports and conveniently pay off upcoming external debt installments in the current fiscal year.

Earlier, the reserves had contracted fast and dropped to a four-and-a-half-year low of $7.48 billion by November 9, 2018, according to the central bank.

On Thursday, Finance Minister Asad Umar had said that Saudi Arabia is about to make “the largest foreign investment in Pakistan’s history” which he will announce soon.

While addressing a ceremony, the finance minister had asserted: “The ball is in our court. We have to get cabinet approval next week, after which an announcement will be made.”

Also on Thursday, the New York-based Moody’s rating agency expressed concern over Pakistan’s falling reserves and rising debt. The long-term outlook remains “robust”, though, due to improved power supply and infrastructure and better security, it added.

The PTI government’s promises for institutional reforms are credit positive, “if effectively implemented,” the rating agency said in its annual credit analysis for Pakistan.

It reaffirmed the country’s rating at B3 negative, which “reflects the sovereign’s high external vulnerability, weak debt affordability, and very low global competitiveness.”

The biggest risk the rating agency sees is rising debt amid falling reserves.

“While Pakistan’s public external debt repayments are modest, low reserve adequacy threatens the ability of the government to finance the balance of payments deficit and roll over external debt at affordable costs,” the agency said. It expects Pakistan’s total debt to reach 76 per cent of GDP by 2020. At present this debt stock stands at 72pc of GDP, which is “higher than the 58pc median for B-rated sovereigns”.

The level of external debt is described as “moderate but rising” and it is threatened by the low level of foreign exchange reserves, the report said. Reserve cover is below 2 months of imports, where the minimum adequacy level is usually considered to be three months, according to IMF recommendations.

The other threat to debt sustainability identified in the report is fiscal. “The government’s narrow revenue base restricts fiscal flexibility and weighs on debt affordability, while its debt burden has increased in recent years.

The economy is expected to continue slowing this fiscal year. “Moody’s expects real GDP growth in Pakistan to slow to 4.3-4.7pc in fiscal 2019 (ending June 2019) and fiscal 2020 from 5.8pc in fiscal 2018 in part due to policy measures taken to address the external imbalance.”

The State Bank said in its latest monetary policy statement that Pakistan’s growth rate will undergo a “notable moderation” this year, to come in “slightly above 4.0pc”.

The report sees an upside in the inflow of Chinese investments under CPEC, “which are already helping growth” and can further improve the country’s growth potential. It also points to improving institutional strength, particularly “central bank autonomy and monetary policy effectiveness.”

However, the reforms will be challenging for any government to navigate because of the country’s “large bureaucracy and complex federal-provincial politics and administrative arrangements”.