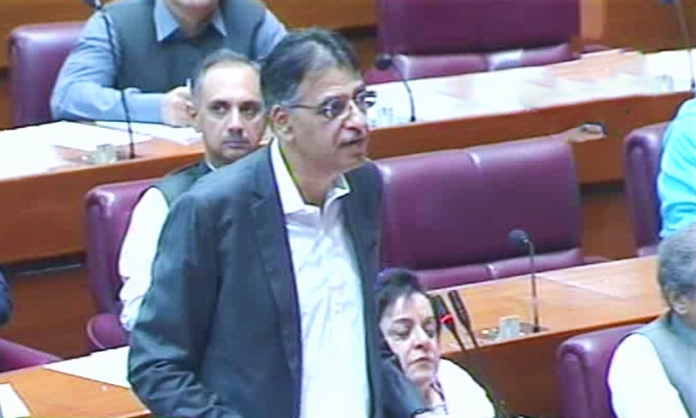 ISLAMABAD: Apart from the financial assistance from Saudi Arabia and the UAE, Pakistan expects financing from China within the next few days, said the Finance Minister Asad Umar on Thursday.

“The day we came back from China after the visit with Prime Minister Imran Khan, I had announced that arrangements for meeting financing gap of the fiscal year 2018-19 have been made.

After the support from Saudi Arabia and UAE we are expecting financing from China within next few days,” said Finance Minister Asad Umar while addressing a post-mini-budget press conference along with Adviser to PM for Commerce, Textile and Industry Production Abdul Razak Dawood and Minister of State for Revenue Hammad Azhar here on Thursday.

“The impression was given in media that the visits of Imran Khan to Saudi Arabia, UAE and China have been fruitless.

Actually, the friendly countries do not want any announcement before a development. The crisis of balance of payment for this financial year has now been over,” said the finance minister while replying to a query.

In response to another query, the minister admitted that the financing Pakistan received from Saudi Arabia and UAE, carries at least 3 percent interest which needs to be paid back.

Rejecting the impression of imposing new taxes worth Rs 12 billion, given by a media outlet, Asad Umar categorically denied that any new tax was introduced in the supplementary budget.

He said that the measures are taken through the economic package (mini-budget), as per estimates of the Federal Board of Revenue (FBR), would cause a revenue shortfall of Rs 6.8 billion.

He also rejected the impression that there was an economic uncertainty in the country saying that the uncertainty was only in media and talk shows.

Asad Umar admitted that the supplementary budget and economic reforms will not have a major impact on the budget deficit and current account deficit.

He, however, claimed that the revenue shortfall, which may also increase following the fresh measures, will be met by the end this financial year as the government was taking appropriate measures for the same.

He stated three main problems were being faced by Pakistan at the economic front that results in unsustainable economic growth over a long period of time.

He identified the budget deficit as one of the major causes of economic problems, saying that the expenditures of the government were exceeding the revenue collection.

The minister said that similarly, another major challenge was the increasing trade deficit as the country was exporting less compare to imports.

He said that third issue the country was facing that investment to GDP ratio was as low as 15-16 percent which needed to be enhanced up to 25-30 percent but added that only investments would not help overcome economic problems, there is need of national savings.

The minister was of the view that Pakistan was lagging behind in economic growth and there were just a few counties which are now behind Pakistan in growth, so there is need to work hard to put the country on the development path.