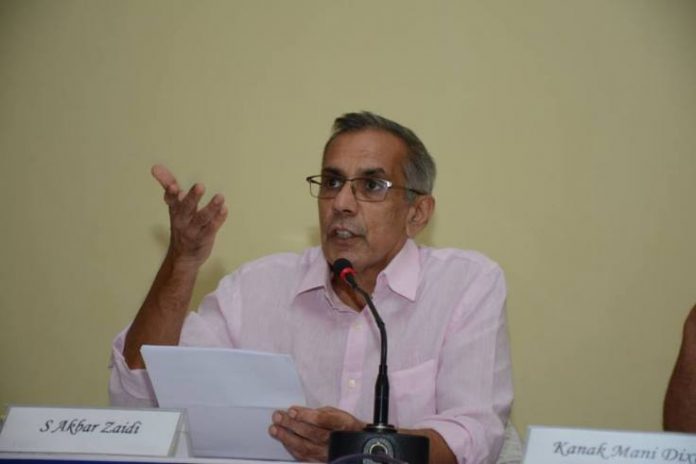 Reform of Pakistan’s economy should be undertaken after considering both economic and political factors. In deciding policy directions and reforms, you have to get the political parties together to form an agenda which all broadly agree upon, that certain things vital for the economy and for the well-being of the people, like taxation reforms, should not be messed with regardless of the party in power.

There should be a minimal consensus between all the political parties of letting a policy continue if a change is to be expected. This predominantly requires one to know what a certain political party wants to achieve and what it wants to do that is going to set the direction of the economy for the long and medium term. Basically, what Pakistan requires today is a robust taxation system, completely revamped and expanded.

Today, less than 1% of Pakistan’s population pays income tax, and most do so involuntarily since their tax is deducted at source. The government should go after tax defaulters and extract money from them. In revamping all this, technocratic solutions are useless. All the parties know that revenue needs to be enhanced. If all the major parties form a consensus, a lot can be achieved.

There is a dire need to rationalize taxes across all the verticals. Many sectors of the economy, like agriculture and industries, decry multiple layers of taxation by the state which need to be rationalized in such a way that they are uniform as well as progressive. There are certain categories which can be taxed, like income, wealth and consumption. Tax should be based on income and wealth, not through an indiscriminate indirect tax mechanism.

A major part of the expenditure goes to defense which needs to be waned and directed towards expenditure on social sectors such as healthcare and education. Pakistan should invest more on schools, hospitals, social development infrastructure, and the knowledge economy.

Things have changed now. Our exports are particularly poor and I do not yet see hope in achieving anything through our existing exports. Our exports are hopeless, we have hardly diversified and been dependent on the same export mix for 50 years. There is nothing we can do with our current exports. All we have is kinoos, dates and some textiles. There is little of value that we have that can be exported to increase foreign exchange. No matter how much we devalue our currency, our exports cannot be increased in their present form. We need to be brave enough to accept this.

The export structure needs a complete overhaul and we need to explore new areas, products and services, where we can gain something in the medium to long-term. The challenge lies in investing in the knowledge economy, information technology (IT) and software. That is where we should be heading now. Our industries are outdated. In the current circumstances, we should forget that we can capture any market through exports. Any efforts to improve the old export model will be counter-productive.

In trying something new, we should focus on developing the IT sector in the country and improve health infrastructure so that people can come to Pakistan to get healthcare, just like India. India is an exporter of health services now, which Pakistan can achieve as well if we prioritize our health sector. Pakistan can also venture into the pharmaceutical industry and encourage exports in that sector.

With textile and cotton, our exports have been static for a long time. We have devalued our currency by almost 35% in just one year and yet our exports have fallen. This will give an idea of our export competitiveness and also about how little devaluation helps our exports. So, it is a completely different restructuring of the economy that we need to direct it towards growth.

The government should provide incentives to certain industries where it sees a high potential for investment, exports, and foreign exchange. Such industries should be protected but not for an indefinite period of time. There should be a timeline and scale defining how the government is going to intervene in a particular sector or industry, and how it is going to be incentivized for a certain period before it becomes uniform for everyone. Incentives should not be for life but they should be there in a rational way if the government wants to increase income and reduce unemployment.

Things can improve considerably if Pakistan’s agriculture sector is reformed, which requires improvement in the irrigation and water distribution system.

Pakistan should actually stop cultivating sugarcane because it consumes a lot of water. We are a water scarce country. There are other healthier alternatives to sugarcane that consume less water. Importing sugar would be a more sensible decision than producing it locally because the international price for sugar has fallen but our prices are higher. But the local price is protected here. There is a considerable political rent that the sugar barons extract out of this sector. There is a potential to reform the whole sector but there is a huge mafia behind the sugar industry so this would be particularly hard to achieve. The sugar sector is patronized by powerful political interests who will not allow any changes. We can grow wheat, barley, and cotton instead. But the government needs to ban underproductive crops.

Import tariffs are a revenue measure but Pakistan cannot rationalize import tariffs as long as it is a part of the World Trade Organization (WTO). And tariffs are a global phenomenon. There is an ongoing tariff war between America and China. If one country increases the tariff for the other, it is responded in a similar manner. The suffering and loss are eventually mutual. Pakistan cannot increase import duties as such.

But if we are able to restructure the system of taxation, which has a component of value-added tax and consumption tax, and income tax is structured in a way that taxes are paid by those who have money, then there is no real need to impose import duty tariffs. Governments levy import duties as a measure to increase revenue so if there is a proper taxing system in place, there is no such need.

But the present trajectory of the government is unknown. It has been five months now that the Pakistan Tehreek-e-Insaaf (PTI) government has been in office. That is almost 10% of the total tenure of the government and yet there is no clear policy direction, vision or even a decision of what the government wants to do next. The growth rate has been predicted to be around 3% for the year and inflation has started rising again. Complacency and indecision by the government have marred the economy with uncertainty, which can wreak havoc of monumental proportion.

These persisting problems have not been created by the PTI and they are not responsible for them. However, they now have to take responsibility for what happens over the next five or so years. They cannot keep blaming the past governments or corruption and have to start by taking decisions to put things in order. Procrastination and indecision, which have both created uncertainty regarding the economy, must come to an end. It is time for the government to act and take decisions rather than dilly-dally.

Akbar Zaidi is a Political Economist based in Karachi. He teaches at Columbia University in New York, and at the IBA in Karachi.

How to fix the Pakistani economy: Dr Nadeemul Haque

How to fix the Pakistani economy: Dr Akmal Hussain

How to fix the Pakistani economy: Dr Hafiz A. Pasha