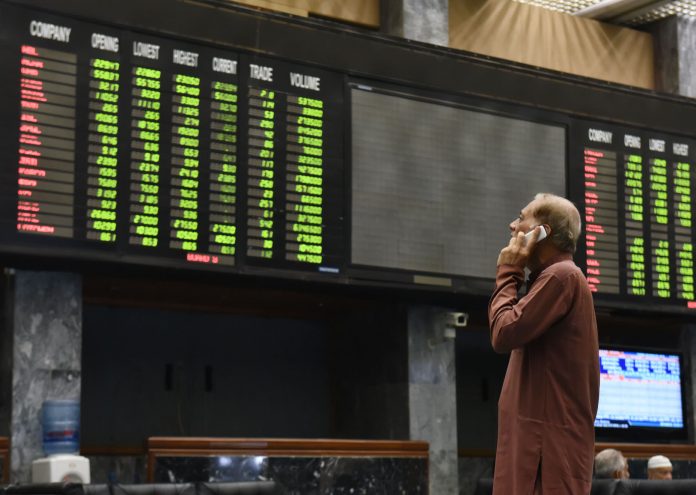 The Pakistan Stock Exchange (PSX) closed the week in negative territory as equities continued their downward trend, shedding 643 points to finish at 38,307 points level. This is the lowest index level in the last 48 trading sessions.

Out of the five trading sessions during the week, the KSE-100 index managed to end in green only on one occasion.

Sector-wise negative contributions came from commercial banks that slipped by 149 points, cement by 120 points, oil and gas exploration companies by 109 points and oil and gas marketing companies by 76 points. On the other hand, sectors that contributed positively included tobacco that was up by 48 points and textile composite by 7 points.

Foreign selling continued this week, clocking in at $15.6 million as compared to a net selling of $3.5 million last week. Selling was witnessed in exploration & production, amounting to $13.4 million dollars and cement $1.5 million.

Volumes during the week settled at 93 million shares, down by 18pc, whereas traded value arrived at $27 million, down by 21pc on a weekly basis.

In the first four trading sessions of the week, foreigners were net sellers of $17.7 million as compared to net selling of $3.5 million in the first four days of the previous week. On the local investors’ side, insurance companies and banks were net buyers of $7.8 million and $4 million respectively.

An analyst from Habib MetroFinancial Services said the equity market is expected to remain inconsistent and depressed for the near term amidst concerns on the macro-economic front. He recommended the investors to maintain standby liquidity and cherry pick fundamentally strong scrips.

An analyst from Arif Habib Limited suggested the investors keep in view the key near term events, including the visit of the Malaysian premier on 23rd March and the announcement of the State Bank of Pakistan’s Monetary Policy this month.

“On the stock market front, we expect the bourse to remain range bound next week due to delay in the IMF agreement and suggest market participants invest in blue-chip scrips,” he added.