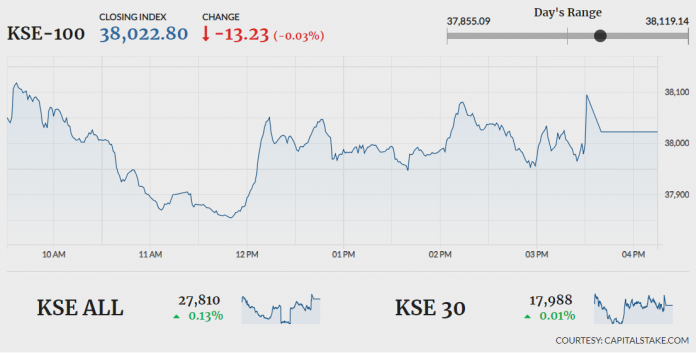 KARACHI: Investors of the Pakistan Stock Exchange (PSX) endured another volatile session on Wednesday. Indices that swung in both directions failed to sustain its gains, ending the day in red.

As per news reports, the government is planning to introduce another amnesty scheme before the upcoming budget, as stated by the finance minister. The International Monetary Fund (IMF) team is also expected to visit Pakistan in third week of April.

Moreover, the Pakistani Rupee continued with its downward dive, cumulatively dropping by 1.8pc (Rs2.55) against the US Dollar during the last four weeks.

Hascol Petroleum Limited (HASCOL -4.33pc) released its financial performance for FY18. The company declared bonus shares of 10pc in addition to 25pc already issued. Sales improved by 35pc YoY, whereas earnings per share deteriorated from Rs8.56 in the previous year to Rs1.14 in the current year. Distribution and admin expenses surged by 47pc YoY and 44pc YoY respectively. Increased finance cost (127pc) also contributed to the decline in net profit.