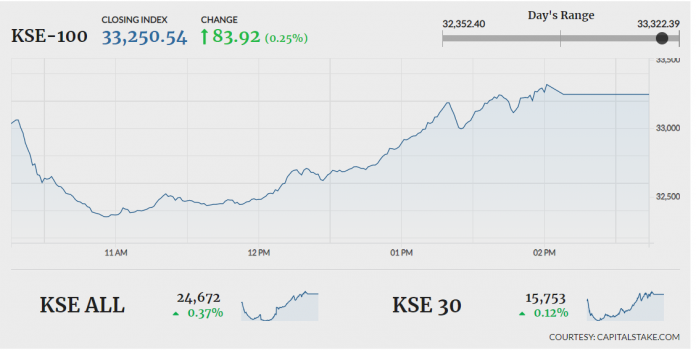 KARACHI: Investors of the Pakistan Stock Exchange (PSX) endured a volatile session on the first trading day of the week, as indices that declined by over 800 points intraday managed to recover the losses to end the day in green.

Investors resorted to selling on the expectation of a further hike in interest rate under the International Monetary Fund (IMF) loan programme.

State Bank of Pakistan Governor Reza Baqir in a meeting with the prime minister assured that the free fall of the exchange rate would not be allowed. Moreover, Prime Minister Imran Khan said that problems faced by the economy would be resolved soon.

The oil and gas exploration sector lost 2.10pc from its cumulative market capitalization. According to news reports over the weekend, the 18th attempt to find hydrocarbons off the shore of Karachi remained futile as no oil and gas reserves have been found.

Honda Atlas Cars (Pakistan) Limited (HCAR +4.99pc) declared its financials for the year 2019. Sales remained almost flat while increased costs pulled down profits by 41pc. Earnings per share stood at Rs26.97 from Rs45.48 in FY18. A final cash dividend of Rs12.15 was also declared by the company.