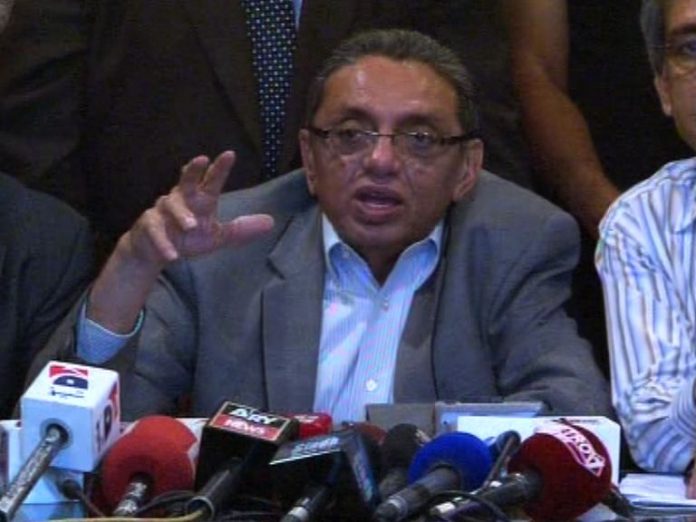 Following the conclusion of the budget speech by Minister of State for Revenue Hammad Azhar, a press conference was held by provincial commerce bodies, with both criticism as well as appreciation dished out by businessmen, a private media outlet reported on Tuesday.

Prominent businessman Siraj Qasim Teli of the Karachi Chamber of Commerce and Industry (KCCI) termed the government’s revenue target as “very ambitious”. However, he expressed hope that the government could come close to achieving it as the country is desperately in need of it.

“A few things that I have noted, the result that has come in this budget, and what we have been witnessing over the past five days, is that they are talking about taxing every industry, every institution.”

He said the government proposed an increase of Rs25 per sack of cement. “What is cement for? It will go into construction; every party involved in construction, be it the common man or a big man, will have to face an increased cost of construction.”

“And the Rs5 million homes they will make, their cost just went up.”

He also lamented the increase in federal excise duty recommended to be imposed at 13.2pc on sugary beverages from the previous figure of 11.25pc.

“Now what will happen is that beverage companies, sugar manufacturers, construction companies will all pass on the costs to the customers.”

Teli said that the government had been trumpeting introducing a new tax regime in which taxes will be imposed on those who had previously been evading payment of taxes.

“The government was saying previously, and what Imran Khan kept saying, is that they will take new taxes from new people (previously evaders).

“Shabbar Zaidi (Chairman of the Federal Board of Revenue) was also saying — he also came here to the chamber — that he who is paying a tax of Rs80, when it actually amounts to Rs100, will not be bothered. We will go after those who are not paying a single rupee worth of tax out of Rs100.

“But what I see here is that they think they have to collect all the taxes from those people who are already paying taxes. They may be taking steps to collect new taxes but I do not know how much that amounts to,” said Teli.

“I can say two things right now: Number one, what we were expecting from Imran Khan and what has happened now, is not good. We used to trust Imran Khan, and still do, he is a good man, honest. But he gave a task to his people: ‘I have committed to doubling the revenue, do it now.'”

“He just gave the task, he didn’t say that in doubling the revenue, don’t force the industries to close.”

He said that prior to deciding such (tax) measures, there should have been some groundwork regarding what capacity each type of industry has and how much they can be taxed in proportion to the capacity.

Lahore Chamber of Commerce and Industries (LCCI) President Almas Haider, said that the government has presented a “reasonable budget in these difficult times”. He did, however, clarify that this is just an initial impression from the budget speech heard.

Haider, to an extent, defended the taxes proposed by the government on various goods and services.

“The current account deficit stood at Rs12bn and will be reduced to Rs7bn with this budget and it is hoped the gap will be bridged within a year or two.

“Obviously, the government had to announce some taxes to reduce the [current account] deficit and to control the budgetary deficit.

“They have provided some relief though, 1600 tariff lines (raw materials) have been rated zero and the additional custom duty has been scrapped. This not only will make our industry competitive in Pakistan, exports will also begin to take off,” he sought to reason.

He credited and congratulated the other chambers of commerce who had joined hands with the Lahore chamber and endorsed the proposal, after which the government had accepted it.

“Out of approximately 2,800 lines of raw material within the tariff, 1,600 were approved. It is hoped that the others will also be included in the next budget. If they are also brought down, our industry will become globally competitive.”

He also lauded the government’s announcement to especially allot money for the dams.

“This is the first government to have allotted 70bn for dams and Rs20bn for Diamer-Bhasha and Rs15bn for Mohmand Dam which amounts to around Rs100bn..this shows the government’s seriousness.”

He urged the government to quickly publish the policy regarding the construction of dams as it is a big investment opportunity which should expediently been give to the business sector.

He also appreciated the government decision for the immediate privatisation of certain projects.

“This is a very welcome sign. It is not the government’s job to run factories or IPPs. They are tasked with governing and regulating…the faster they hand over these projects to the private sector, the quicker we will gain efficiency in the system.”

“Many companies were nationalised in 1973, and to this day, neither have the machinery been replaced, nor has there been any training of workers, and they are selling the same old products, or they are just shut down,” said Haider.

“The past governments have constantly been supplying these companies money. This is a wastage of our tax rupees. This is not a warranted use that you just make these companies survive as they are politically important to you.”

He also hailed the proposed increase in minimum wage to Rs17,500 and hoped that the agricultural worker as well as the domestic worker, both see increased pay.

“The [target] tax percentage has risen by almost 40 per cent. Collection dropped down last year and will further drop this year. This is due to the cost of products. The manufacturers will not be able to produce at the cost that China does when the product comes here [to Pakistan].

“For example, we are manufacturing a pen. From China, we will get it for Rs10 whereas we will be producing it for Rs50. Who will buy it from us? So automatically, our imports will increase and exports will not be possible. We had forwarded our recommendations to the government which were ignored and the businessmen are totally against the measures announced.”