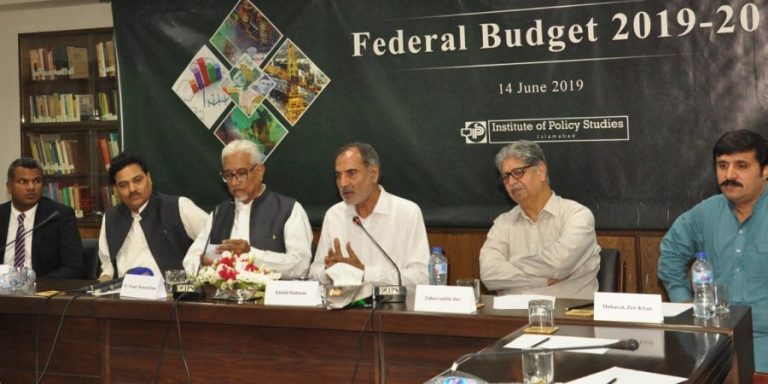 He claimed that the country had almost no economic management during the past three fiscal years – 2015-16, 2017-18 and 2018-19 – while ad-hoc approaches were adopted to shoot the troubles.

Speaking at a roundtable session held at the Institute of Policy Studies (IPS) to review the Federal Budget 2019-20, he stressed the need to build a national consensus on the economic challenges as well as the IMF deal through an effective communication strategy, which he found nearly non-existent in the government’s policy so far.

Questioning the rationale behind opting for the IMF programme this late, he said that a key focus of the IMF programme was to fix the primary deficit, which was the need of the time for the country’s economic management.

The former finance secretary viewed the IMF’s quarterly review of the economic targets for the next three years as a good omen for the country’s economic discipline.

He also praised some steps being taken in the budget, including a ban on government borrowing from the State Bank of Pakistan. “This, however, should be coupled with improving the governance system and privatising the loss-making public entities instead of “fixing” them endlessly,” he viewed.

He advised the government to privatise the country’s power sector companies so as to get rid of the menace of spiralling circular debt, which was one of the biggest burdens to manage every year.

In his opening presentation, Zafarul Hasan Almas said that the recent budget was made in the most difficult economic environment with unprecedented challenges of macroeconomic instability, growth slowdown, high inflation, a decline in private investments, issue of fiscal adjustments, debt servicing, trade imbalance, and high losses incurred by public sector enterprises.

Dr Aneel Salman was of the view that the implicit obligations were missing in the budget as no long-term objectives were seen on paper. He said that the country’s economy has always been unstable, unsustainable, unfair and unpredictable, a state that can only be improved by good governance.

He said that there was considerable policy research work done by the country’s academia and it was the government’s responsibility to take advantage of it.

Mubarak Zeb Khan opined that it was the political economy that was at the centre of all problems, stressing that the expenditures done in the name of Public Sector Development Programme should be monitored.

He, however, was able to see a positive side, stating that the pressures brought forth by IMF and FATF may pave way for some kind of improvement in the government affairs. “Legislations such as the ‘Baynami Act’ are a positive sign,” he remarked.

Zaheeruddin Dar was critical of the proposed federal budget and questioned if the budget was made to increase the growth or to escalate poverty. He said that the interest rate set for this year would not attract any business investment.

Khalid Rahman on the occasion said while several measures taken in the federal budget 2019-20 were raising fears in nearly all sectors of the economy and various segments of society, it may well pay good dividends in the long run for enhanced fiscal discipline and meaningful economic management.

“It is, however, essential to develop a national consensus through effective communication strategy to see off the difficult times, a need that has been sorely overlooked by the people at the helm of affairs,” he added.