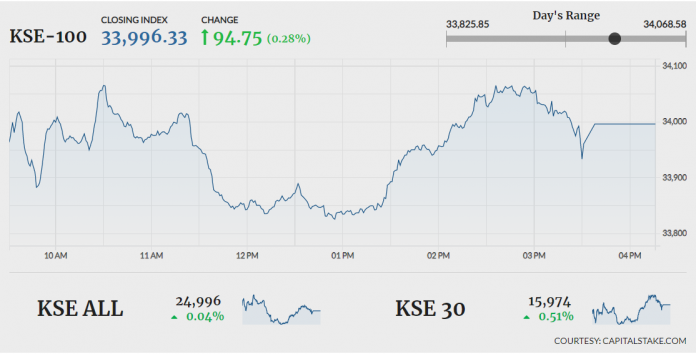 KARACHI: The Pakistan Stock Exchange witnessed a slow start to the trading week, as the indices remained range-bound while volumes remained thin. Foreign investors, much to everyone’s surprise, closed the preceding week (from June 24 to June 28) as net buyers with a net outflow of $7.94 million.

According to news reports, over 92,000 people benefited from the tax amnesty scheme as on June 30, paying Rs42 billion. The government has extended the asset declaration scheme until July 3.

Meanwhile, the total provisional tax collection of the Federal Board of Revenue (FBR) stood at Rs3,820 billion till June 30, as against the revised tax target of Rs4,150 billion, a shortfall of Rs330 billion.

Moreover, President Arif Alvi signed the Finance Bill for the year 2019-20, bringing the bill into force on Monday. The total outlay of the budget is Rs7.022 trillion.

On the market front, Fauji Cement Company Limited (FCCL -0.32pc), in a notification sent to the exchange, announced that the company has commissioned a 12.50MW Captive Solar Power Plant which will add to the captive generation capacity of FCCL.