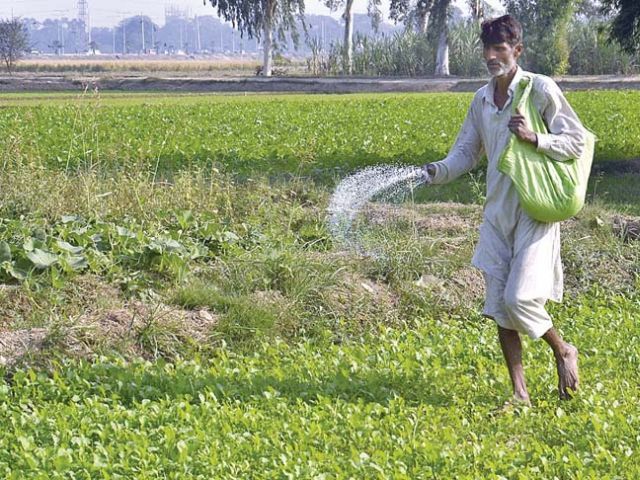 ‘Govt cannot take fertiliser as a standalone case and if subsidy is given to one sector, others will demand the same too’

ISLAMABAD: As a result of the recent hike in the rates of electricity and gas, the prices of fertiliser are also likely to jump to increase by Rs100 per bag.

Adviser to Prime Minister on Commerce Abdul Razaq Dawood on Tuesday hinted that the prices of fertiliser could rise by Rs100 per bag owing to an increase in the gas rates.

Addressing a press conference, the adviser said that the fertiliser sector had demanded an increase of Rs200 per bag but this was not acceptable to the government.

“We had a meeting with the fertiliser manufacturers before the budget and it was decided that they will not unilaterally increase the prices, since the gas prices have been increased in the budget while the cabinet today decreased the Gas Infrastructure Development Charges (GIDC),” Dawood said. “We will work on the prices tomorrow (Wednesday) and the meeting with fertiliser industry is scheduled on Thursday.”

The adviser said the government was compelled to maintaining the fertiliser prices at reasonable rates, as higher prices could lead to a negative impact on the agriculture sector.

He, however, turned down the idea of giving subsidy to the fertiliser sector, as it was part of the deal with the International Monetary Fund.

“We cannot take fertiliser as a standalone case and if subsidy is given to one sector, others will demand the same too,” he added.

The adviser said that there were adequate fertiliser stocks in the country, adding that during the past six months, 3.2 million tonnes of fertiliser was produced against the demand of 2.9 million tonnes.

Responding to a query about resentments against harsh measures by the government, Dawood said that the government was taking the business community into confidence and was involving them in policymaking.

“The prime minister is going to Karachi tomorrow (Wednesday) to hold meetings with traders. But the issue is that nobody in Pakistan, including the manufactures, traders, retailers anybody want to pay taxes.”

The PM’s aide said that the tax culture had deteriorated to the lowest levels. “We all agree that there is a need to collect taxes from all relevant quarters as the tax to GDP ratio is too low in the country, however, we may differ over the speed of reforms we are initiating.”