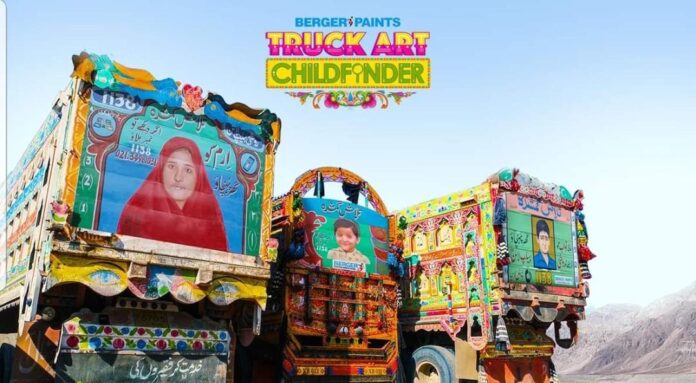 BBDO Pakistan, in collaboration with conceptual artist and anthropologist Samar Minallah Khan and her team of truck artists for the designing and execution of the #TruckArtChildfinder campaign.

In this project, 20 trucks were painted with portraits of missing children which then travelled around the country. The campaign won two Silver Lions and two Bronze Lions. Roshni Helpline partnered in the recovery of missing children and Sarah Tareen Productions directed the film.

When asked what drew her to truck art, Samar Minallah Khan stated, “Beyond the unique aesthetic, it was the idea of a billboard on wheels that blends so seamlessly into any local setting.”

Sarah Tareen, who directed the film on the Truck Art Childfinder project, commented, “It is an honour to represent Pakistan at such a prestigious platform and to be bestowed with the recognition. We hope that through this effective campaign more children will be reunited with their families.”

Impact BBDO Middle East and Pakistan Regional Executive Creative Director Ali Rez said, “We are eternally grateful to our client partners, collaborators, and agency teams who share the belief and commitment to create the most creatively effective work not only in the region, but in the world. Good work works good.”

Ali Rez was also on the prestigious Cannes Lions Glass jury this year, a category that awards work striving for gender empowerment and fights gender inequality and injustice. He is the only Pakistani to have judged at Cannes Lions.

‘The Bridal Uniform’ for UN Women

BBDO Pakistan, in collaboration with fashion designer Ali Xeeshan and Mint PR, came out with a project which stood as a protest action against child marriages. This guerrilla campaign – which hijacked a bridal wear show to launch a bridal gown merged with a school uniform – won a Bronze Lion in Design.

In the last five years, BBDO has consistently brought international advertising honour and fame to Pakistan, remaining the only advertising agency in the country to have been recognised at this grand festival. They have now won a total of 11 Lions in this short time, including two Golds in 2015.

Cannes Lions are the most established and coveted awards for the creative and marketing communications industry, and have been celebrating creativity since 1954. The trophy remains one of the toughest awards to win in the industry. This year, juries judged from more than 30,000 entries from around the world.