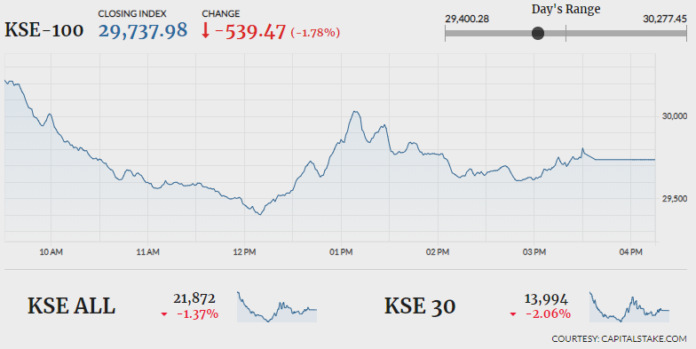 KARACHI: Shortly after the commencement of the session on Thursday, the worst fears of Pakistan Stock Exchange (PSX) investors became a reality when the KSE-100 Index broke the 30,000 psychological mark. The index had not seen this level during the last four years.

At one point during the trading session, there was not even one script trading positively in the benchmark index. The only takeaway from the day remained the overall volumes, which crossed the 100 million mark for the first time since July 18th.

Mutual Funds continued with the selling spree again on Wednesday. The institutions were net sellers of $3.87 million. In the last 10 days, cumulative net selling from funds has touched $17.20 million.

On the financial side, Engro Fertilizer Limited (EFERT +3.03pc) defied the market sentiments and managed to put up a decent show on Thursday after declaring its financials for the second quarter of the FY2019.

The company reported sales of Rs17.70 billion with a profit of Rs4.69 million. Earnings per share clocked in at Rs3.51, up 66.35pc compared to the same period last year. The management also approved a cash dividend of Rs5.00 per share.