KSE-100 manages to close in green amid volatility 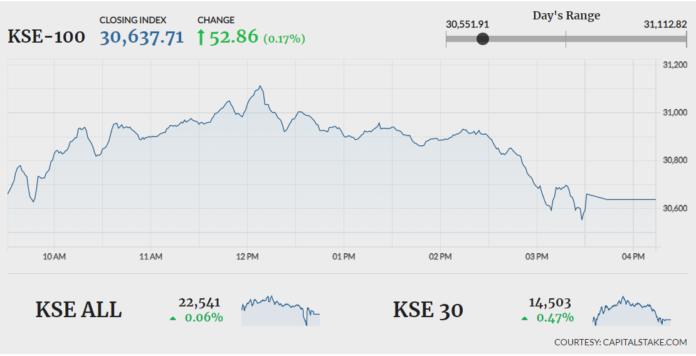 KARACHI: Bulls of the Pakistan Stock Exchange (PSX) came out victorious after a tough battle with bears on Wednesday.

The indices started off on a positive note but lost its momentum during the afternoon session. However, it managed to recover the losses and closed the day in the positive territory.

On the economic front, Pakistan’s fiscal deficit rose by 58pc to a record Rs3.4 trillion in FY19, making up 8.9pc of the gross domestic product. The increase has been attributed to a decline in revenue collection and failure in controlling expenditures.

Standard Chartered Bank (Pakistan) Limited (SCBPL +3.77pc) declared its financials for the second quarter of FY19 along with an interim cash dividend of Rs1.25 per share. The company’s revenue increased by 72pc YoY, while its earnings per share rose from Rs0.64 in the same period last year to Rs0.96.

Other banking companies, including Meezan Bank Limited (MEBL +3.38pc) and National Bank Of Pakistan (NBP -2.20pc), declared an EPS of Rs3.23 and Rs3.25 for 2QFY19 with the former declaring an interim cash dividend of Rs1.00.

Akzo Nobel Pakistan Limited (AKZO +0.13pc) also announced its financial performance for the second quarter of 2019. Sales declined by -2.90pc YoY while earnings per share appreciated from Rs1.94 in the same period last year to Rs2.39 in the current period.