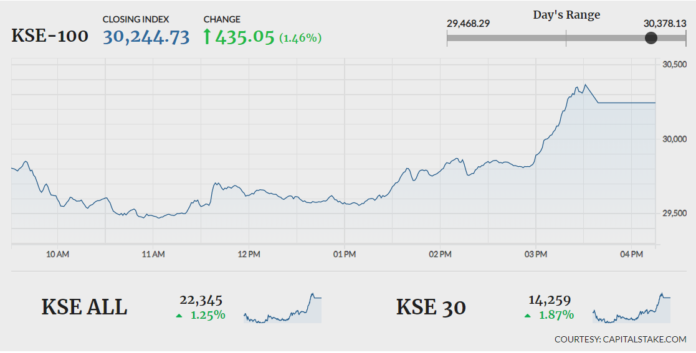 KARACHI: After a rough start to the trading session on Wednesday, the Pakistan Stock Exchange (PSX) managed to stand its ground and closed in green. Foreign investors ended the previous session as net buyers with a net inflow of $1.23 million.

On the economic front, Pakistan’s Consumer Price Index (CPI) inflation clocked in at 11.6pc for the month of August. The CPI inflation stood at 10.3pc in the month of July 2019 while its was recorded at 5.80pc in August 2018. Out of all commodities, major increase was marked in gas prices, which rose by 142.57pc YoY.

Meanwhile, as per the State Bank of Pakistan, the outflows of profits and dividends repatriated from the country increased by a minor 0.95pc to $138 million in July as compared to $136.7 million in the same month last year.

The oil and gas exploration sector (+147.90 points), cement sector (+80.73 points) and fertilizer sector (+55.73 points) remained the top positive contributors to the KSE-100 Index. On the other hand, the banking sector pulled the index down by 33 points.

The overall market volumes improved significantly from the previous session and were recorded at 128.89 million, out of which 107.35 million came from the KSE-100 scripts. Maple Leaf Cement Factory Limited (MLCF +5.81pc) was the volume leader for the second consecutive session with 11.46 million shares exchanging hands, followed by Fauji Cement Company Limited (FCCL +4.29pc) and Unity Foods Limited (UNITY +7.19pc). The scripts had traded 9.87 million shares and 9.37 million shares respectively.