China, US to hold trade talks in Oct 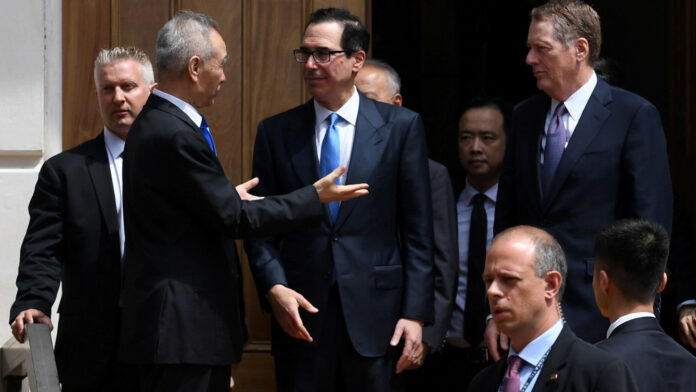 BEIJING/WASHINGTON: China and the United States on Thursday agreed to hold high-level talks in early October in Washington, boosting markets as investors hoped for a thaw in the trade war between the world’s two largest economies that has taken a toll on global growth.

The meeting was arranged during a phone call between Chinese Vice Premier Liu He and US Trade Representative Robert Lighthizer and US Treasury Secretary Steven Mnuchin, China’s commerce ministry said in a statement on its website. China’s central bank governor Yi Gang was also on the call.

US President Donald Trump had previously said the sides expected to meet in September. News that the face-to-face talks were scheduled sent Asian, European and US stock markets higher, with all three major US stock indices touching over a month high.

European shares also rose for a second straight day on Thursday, with the pan-European STOXX 600 index hitting its highest level since Aug 1.

On Sunday, Washington began imposing 15pc tariffs on an array of Chinese imports, while China began placing duties on US crude oil. On Monday, China said it had lodged a complaint against the United States at the World Trade Organization.

Pakistan Customs collected Rs54 billion on the import of mobile devices through Device Identifica­tion, Registration and Blocking System (DIRBs) in the past year, which...
Read more
World Business News

NEW DELHI: Thousands of Indian farmers, angry over reform of the agriculture sector, held a third day of protests on the outskirts of the...
Read more
- Advertisment -

November 29, 2020
Pakistan Customs collected Rs54 billion on the import of mobile devices through Device Identifica­tion, Registration and Blocking System (DIRBs) in the past year, which...