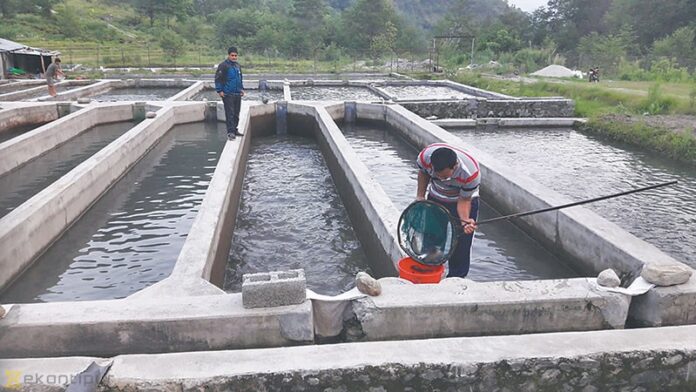 Earlier, the task force on fisheries sector development, after due consultations with the provinces, formulated a programme which comprised of three projects namely; shrimp farming, cage farming and trout fish farming in Khyber Pakhtunkhwa and Gilgit-Baltistan. A total sum of Rs1.35 trillion was allocated for the above-mentioned projects.

Inaugurating the fish farming programme, Minister Sahibzada Mehboob said that Pakistan is blessed with vast reservoirs of freshwater in the forms of rivers, canals and lakes; there are ample opportunities for the development of aquaculture/fish farming. However, he lamented that the area remained severely neglected in the past.

“It is unfortunate that per capita annual fish consumption (in Pakistan) is only two kilogrammes as compared to 20kg in the world. Pakistan is the only country where 1,100km coastline remained underutilised for coastal/marine culture/farming,” he remarked.

The minister said that the government has given due importance to the development of the fisheries sector and hence going to formulate the country’s first-ever ‘fisheries policy’ with technical support from Food and Agriculture Organization (FAO).

Mehboob Sultan noted that KP and Gilgit-Baltistan are blessed with natural water resources and that these waters are a haven for trout farming. “Proper planning in this regard would not only help alleviate poverty from the area but would also assist the government in meeting the food requirements.”

He said the initiatives under the Prime Minister’s Agriculture Emergency Programme would promote tourism in KP and GB, adding that the government could earn precious foreign exchange through the export of trout fish.

The minister urged the farmers to take maximum advantage of the natural resources and join hands with the government to ensure effective implementation of the programme.

He also expressed his resolve that the project would be monitored rigorously for maximum output.

Speaking on the occasion, Pakistan Tehreek-e-Insaf stalwart Jahangir Khan Tareen said that his party came to power with a vision to bring revolutionary changes in all sectors of the economy; agriculture is one of the vital sectors for alleviation of poverty in Pakistan.

Tareen said that the provincial and federal governments are contributing billion of rupees for trout farming project in KP and GB. He stated that the politicians; bureaucracy and farmers must work in collaboration to achieve the desired results.