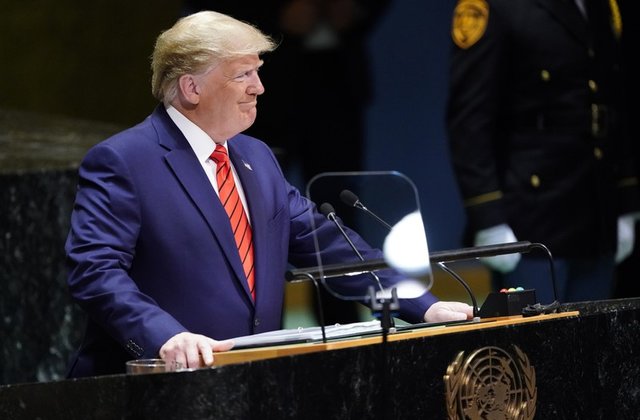 UNITED NATIONS: US President Donald Trump delivered a stinging rebuke to China’s trade practices on Tuesday at the United Nations General Assembly, saying he would not accept a “bad deal” in US-China trade negotiations.

Four days after deputy US and Chinese negotiators held inconclusive talks in Washington, Trump’s remarks were anything but conciliatory and emphasized the need to correct structural economic abuses at the heart of the countries’ nearly 15-month trade war.

He said Beijing had failed to keep promises that it made when China joined the World Trade Organization in 2001 and was engaging in predatory practices that had cost millions of jobs in the United States and other countries.

“Not only has China declined to adopt promised reforms, it has embraced an economic model dependent on massive market barriers, heavy state subsidies, currency manipulation, product dumping forced technology transfers and the theft of intellectual property and also trade secrets on a grand scale,” Trump said.

“As far as America is concerned, those days are over.”

Although Trump held out hope that the United States and China could still reach a trade deal, he made clear he wanted a deal that would rebalance the relationship between the two economic superpowers.

“The American people are absolutely committed to restoring balance in our relationship with China. Hopefully we can reach an agreement that will be beneficial for both countries,” Trump said. “As I have made very clear, I will not accept a bad deal.”

Trump has also recently said that he was not interested in a “partial deal” to ease tensions with China, saying that he would hold out for a “complete deal.”

People familiar with the talks said that no new Chinese proposals were presented last week, but both sides characterized the talks as “productive” and said minister-level talks would take place in early October.

In his UN speech, Trump also drew a link between resolving the US-China trade dispute and Beijing’s treatment of Hong Kong. Washington was “carefully monitoring the situation in Hong Kong,” he said. “The world fully expects that the Chinese government will honor its binding treaty made with the British and registered with the United Nations, in which China commits to protect Hong Kong’s freedom, legal system and democratic ways of life,” Trump said. Hong Kong was a British colony until 1997.

“How China chooses to handle the situation will say a great deal about its role in the word in the future. We are all counting on President Xi as a great leader,” Trump added.

PESHAWAR: The Khyber Pakhtunkhwa (KP) government has approved a grant of Rs150 million for the welfare of religious minorities out of which Rs100m would...
Read more
- Advertisment -