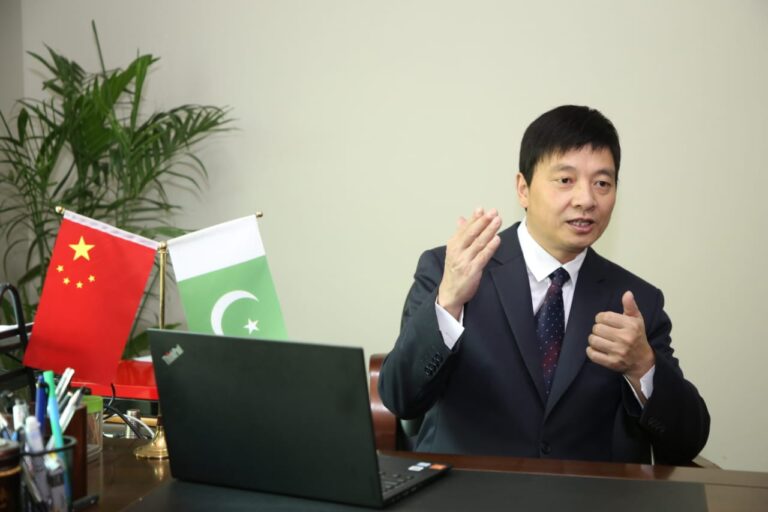 The Suki Kinari Hydropower Project is a run-of-the-river project which is being established alongside the Kunhar River in Khyber Pakhtunkhwa. It is also one of Pakistan’s largest private sector power development projects and is being constructed as part of the China-Pakistan Economic Corridor’s “Early Harvest” projects.

Initial work regarding power generation at the Kunhar River was started in the 1960s, but little groundwork was carried. It was only in 2016 that the project was realised after the KP government signed an agreement with SK Hydro Power Ltd and the Industrial and Commercial Bank of China to build a dam at the site.

The total cost of the project is $1.9 billion and it is being developed on the Build-Operate-Transfer (BOT) model – which implies that the China Gezhouba Group Corporation (CGGC) would operate it for 30 years after which the project would be transferred to the KP government.

In an exclusive interview with Pakistan Today, Zhang said that around 41.85pc construction work has been completed.

“Despite some initial hitches, the project is developing at a faster rate than before. In some areas, we are months ahead of schedule. Earlier, issues such as land acquisition were proving to be a hurdle but now they have been resolved successfully,” said the SK Hydro Ltd chairman, adding that laws governing land acquisition in Pakistan needed to be changed so that foreign investment could be increased in the country.

“The KP law governing land accusation prohibits the cutting down of trees so that presented us with a bit of a problem, since the project is being developed on forest area. However, the unwavering support of the provincial government has allowed us to overcome this impediment,” Zhang Shiyun said while expressing his gratitude to the KP provincial assembly which approved a special resolution allowing his company to acquire forest land and clear it of trees.

“We are positive that the project would be completed at the scheduled time of December 31, 2022. We have full support of the local and provincial governments. District Commissioners have been very cooperative and have offered us unconditional support,” said Zhang.

Asked about the installed capacity of Suki Kinari Hydropower Project, the company’s chairman said that once completed, the project would add 884 megawatts to the national grid. He said that all four units would become fully operational by 2022.

In answer to what the cost of electricity produced at Suki Kinari would be, Zhang said, “We expect each unit to cost 8.8 cents,” adding that around 4,000 labourers were employed at the project which would increase to 6,000 as the project nears completion.

“Our project has brought employment to thousands of locals. If you take into account the direct and indirect beneficiaries of the project, the number would grow beyond 10,000,” he added.

Zhang also pointed out that the project had benefitted local businesses by helping increase the production of cement, reinforcements, aggregate, diesel, explosive etc.

Talking in regard to Corporate Social Responsibility (CSR) services, Zhang Shiyun said that his company spends at least Rs20 million each year for the benefit of the local population.

“Under CSR, CGGC has constructed seven bridges on Kunhar River from Nalan to Paras; these bridges would be handed over for community service after the project becomes operational,” he said. “In addition, our [Chinese] staff visits various communities and school events every year and also cleans up parks, schools, and other community locations.”

He said the CGGC holds Sino-Pakistan friendship in very high regard and makes it a point to impart Chinese values and culture to local youth. In addition, we are also teaching Chinese language to local students,” he added.

In comparison to the SK Hydro Project, Zhang said that the Neelum-Jhelum Power Project – which was also developed by his company – faced some serious issues before his company took the project over.

“In order to complete the project, the CGGC mobilised resources from all over China to get the [Neelum-Jhelum] project completed on time. This reflects my company’s ability to overcome challenges.  Likewise, we also faced numerous challenges at Suki Kinari but were quick to exert extra effort which has helped in construction work picking pace.”

“We will get the project completed on schedule in line with our company’s record and reputation,” Zhang Shiyun concluded.