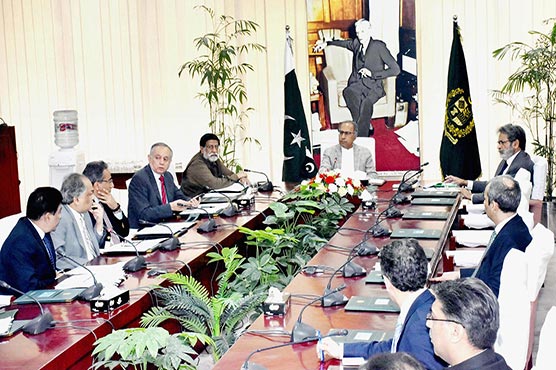 ISLAMABAD: The Cabinet Committee on Privatisation (CCoP) on Friday approved the sale of SME Bank as well as the properties of different state institutions, including the Pakistan International Airline (PIA).

Meanwhile, the committee discussed the privatisation of PIA-Investment Limited and approved a proposal for the constitution of a task force, to be headed by Privatisation Commission Minister Muhammadmian Soomro, to examine and process all necessary formalities for an early disposal of the PIA properties, including the Roosevelt Hotel in New York and Hotel Scribe in Paris.

The CCoP instructed the PIA management to present in the next meeting the findings of the feasibility study conducted by it in pursuance of an earlier CCoP decision to carry out an appraisal of various management and financial options in order to gain optimal returns from the Roosevelt Hotel.

The committee further directed the PIA management to update on a monthly basis regarding the progress of work, advising the airline to carry out its plan in coordination with the Aviation Division.

Moreover, the CCoP took up a proposal from the Earthquake Reconstruction and Rehabilitation Authority (EERA) for deferring the delisting of its 17 properties until June 2020, when EERA would be subsumed into the National Disaster Management Commission (NDMC) as per a government decision already taken to transform National Disaster Management Authority (NDMA) into a vibrant and self-sufficient entity.

EERA was of the view that delay in the privatisation of its assets till June 2020 would allow sufficient time for a possible legislation to incorporate these properties into the National Disaster Management Fund (NDMF).

The Privatisation Commission told the CCoP that the 17 properties belonging to EERA had been picked up for privatisation in pursuance of a federal cabinet decision of 7th March 2019, and subsequent identification by an Inter-Ministerial Committee, constituted by the prime minister of 32 properties belonging to nine ministries, divisions and organisations which themselves had proposed these properties for sale and also forwarded relevant authority letters to the Privatisation Commission for further processing.

The PC also submitted that it had already hired a financial adviser for the sale of 32 properties, adding that withdrawal of properties as being proposed by the EERA would adversely affect the whole privatisation process, besides sending negative signals to potential buyers and investors.

The CCoP discussed the issue in detail and after input from members did not agree to the proposal from EERA for delay in the delisting of its properties and advised the authority to complete all codal formalities still pending at its end to let the privatisation process move ahead.

To another proposal by the Commerce Division for delisting from privatisation a 15-acre plot situated in an industrial area in Multan on the grounds that the same plot could be utilised more efficiently for some other purpose rather than being sold at a possibly low price, the CCoP decided that the privatisation of the asset in question would go ahead as already decided by the government.

However, a committee headed by Adviser to PM on Commerce Abdul Razak Dawood would closely scrutinise the reference price at the bidding stage to see if it matched the value of the plot and in view of it not being in tune with the worth of the property, the ministry would come up with an elaborate alternative plan detailing various aspects of the opportunity cost to use the plot, lying idle since 2011, quickly and efficiently.