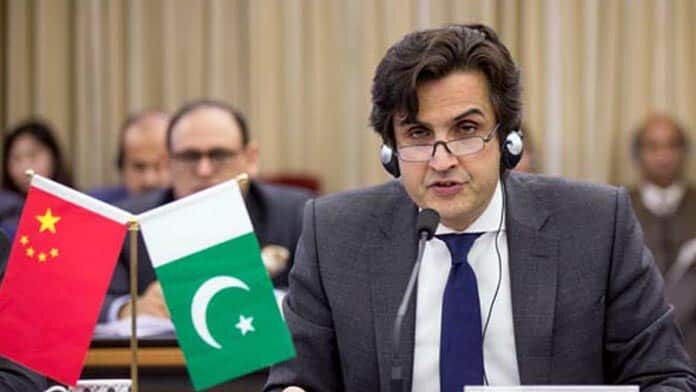 ISLAMABAD: Planning, Development and Reform Minister Makhdoom Khusro Bakhtiar said on Monday that under the next (2nd) phase of China Pakistan Economic Corridor (CPEC), the industrial base would be expanded in order to help increase the country’s exports.

Addressing the 3rd annual two-day conference tilted ‘Universities Consortium on CPEC’, the minister noted that China has a total trade volume of $4,000 billion with the world while Pakistan has only $80 billion worth of trade with the global market.

“The Chinese government has offered 25,000 scholarships for Pakistani students, besides financing to build 1,000 small schools in different areas of the country,” he stated. “We have broadened the CPEC cooperation in areas of socio-economic development, agriculture, industries, infrastructure, energy and people-to-people contact through universities, as it will help enhance multilateral relations between the two countries.”

Bakhtiar said that diagnostic studies through concrete research were required to evaluate the potential sectors that could harmonise bilateral socio-economic development. He continued that close liaison between academia and industrial sector would be necessary to fill the gaps and connect the two sides for shared economic growth.

He said that after the fourth industrial revolution, the concept of knowledge economy has been enhanced, adding that the government has prioritised technological advancement in order to introduce innovative industrial concepts.

Bakhtiar said the government wanted to add new sectors, including iron, mines and minerals, oil and gas, copper, pipeline, textiles and automobile, to exploit the potential of trade through CPEC.

The minister further informed that China would invest $10 billion in the oil and gas sector and $4 billion in local steel sector through CPEC projects. “As many as $9 billion have been approved for the constuction of a railway line from Peshawar to Karachi.”

He added that the government had established CPEC Authority which would work as a one window for all CPEC related issues so that “we can fasten the pace of the projects and remove all bottlenecks to ensure efficient implementation”.

The minister maintained that CPEC would be a gateway to progress and prosperity. “The year 2019 has been significant for CPEC as several significant milestones have been achieved or would be achieved by the end of the year,” he added.

The recent visits of Prime Minister Imran Khan and his interaction with Chinese leadership, he said, had in true sense, broadened and enhanced the scope of future cooperation in diverse fields.

Addressing the conference, Ambassador of China to Pakistan Yao Jing said that Universities Consortium on CPEC would play a vital role in the completion of CPEC framework.

He said the corridor provided platform for cooperation to connect the society, institutions and people of the both sides.