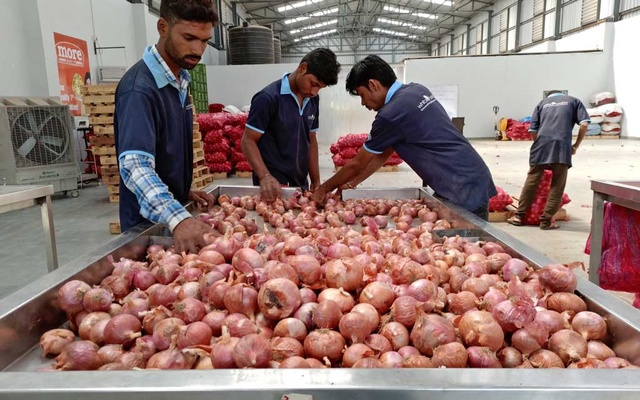 MUMBAI: As onion prices in India have soared tenfold this year, Mukesh Thoke, a restaurant owner on the outskirts of Mumbai, faces a dilemma – raise prices or take a hit on margins.

“People come to our restaurant for non-vegetarian food which requires a lot of onions. We can’t reduce onion usage as it would change the taste of our food,” said Thoke, who currently shells out 22,000 rupees ($307) every week for onions, up from 2,500 rupees at the beginning of the year.

Some analysts even believe the price surge played a direct role in the Reserve Bank of India’s surprise move to hold rates steady last week.

“We advise investors to track onion prices as they hold the key to the next RBI rate cut,” said BofA Securities in a note to clients on Tuesday.

With India’s Finance Minister Nirmala Sitharaman having to fend off questions in parliament last week around the surge in onion prices, the government has moved to not only ban exports of the vegetable but also rush to import from places like Turkey and Egypt.

But the moves have failed to soften the price of onions, which are now more expensive than apples and pomegranates.

Unlike Thoke, other restaurateurs have begun to use fewer onions, or have started using alternative fillers like cabbage.

“We can’t afford it. We have definitely reduced the quantity of onions we used,” said Nagarajan D, owner of Sendhoor Cafe, a south Indian restaurant chain.

Even households are being forced to change their diets.

“We can’t afford to spend 150 rupees or more for a kilo of onions. The Indian government should do something to bring down prices,” said Parvati Patil, a Mumbai-based housewife.

The price surge has forced a few state governments to start selling onions at a subsidised price, in the same manner as the country does for grains such as wheat and rice.

“Even those who stopped buying food from the public distribution system long ago are queuing up for onions,” said an official from the state of West Bengal, which has struggled to manage queues of buyers.

ISLAMABAD: Cabinet Division on Saturday issued notification for the appointment of Shaukat Tarin as federal minister for finance and revenue and Shibli Faraz as...
Read more
World Business News

Ant Group is exploring options for founder Jack Ma to divest his stake in the financial technology giant and give up control, as meetings...
Read more
HEADLINES