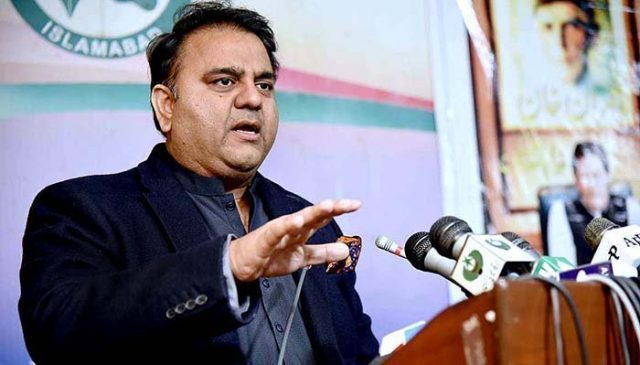 ISLAMABAD: Science and Technology Minister Fawad Chaudhry said on Thursday that the government is aiming and planning to keep the hi-tech industry tax free with zero customs duty for ten years.

He said this while speaking at the AI National Conference titled ‘AI Implications in National Security and Hybrid Warfare’.

The conference was organized by the Center of Pakistan and International Relations (COPAIR).

The minister said that back in the 80s’ when Pakistan was fighting the world’s war, the then establishment made two crucial mistakes. “We established many madrassas but did not bring to our country the campuses of Oxford and Harvard universities. Our second mistake was to not focus on research and development.”

He said that countries all over the world focus on building their military capabilities but also invest in the research and development sector. “We have state of the art drone technology, but we are not using them for agriculture as is being done elsewhere in the world. We make equipment for JF-Thunder and tanks but cannot manufacture our TVs or phone chargers.”

The minister emphasized public-private partnership in research and development projects. He said that the world today makes plans spanning single decades. “One Elon Musk or one Steve Jobs can end up changing the entire dynamics of science and therefore future can only be planned in short periods.”

He said that the incumbent government is attempting to bring back the glory of Pakistan’s development in the sixties.

He said, “We are in efforts to regain the country’s past glory when it established the organization like SUPARCO and the countries like India and China were not even in the list of our competitors. Today when we talk about sending Pakistan’s first space mission in 2022, people show a surprising attitude.”

Fawad Chaudhry said that his ministry was in contact with the authorities to bring PayPal account in Pakistan which would remove hurdles for Pakistan’s IT experts in receiving payments after selling their products internationally. “Pakistan has 527 research and development institutions but lacks proper coordination. The government will take steps to bring all these institutions under one umbrella to increase their effectiveness,” he said.

The conference also included a panel discussion, during which former DG FIA Ammar Jafri said, “I will be very frank with all of you. We are not prepared to deal with a human hacking a Facebook account, so how can we be prepared for computers doing the hacking?” He said that Pakistan is among the only three countries in the world without a cyber security policy. He said that in the future wars will not involve boots on the ground, but it will be through technology. “The kill switch is already working. It took three minutes to shut down the internet in Iraq.” Answering a question he said, “Our infrastructure is not prepared for a zero day attack and there are several vulnerabilities.”

Professor Dr Zafar Nawaz Jaspal from School of Politics and International Relations, Quaid-i-Azam University Islamabad said, “We try to take on new challenges with a traditional approach without realizing the limitations of the traditional methods.” He gave a four-pronged proposal to deal with the new challenges arising out of AI influence, mentioning research centers, legislation, law enforcement agencies, media, and academia as the stakeholders and agents of change that can bring about the needed preparedness and capabilities to deal with the challenges.