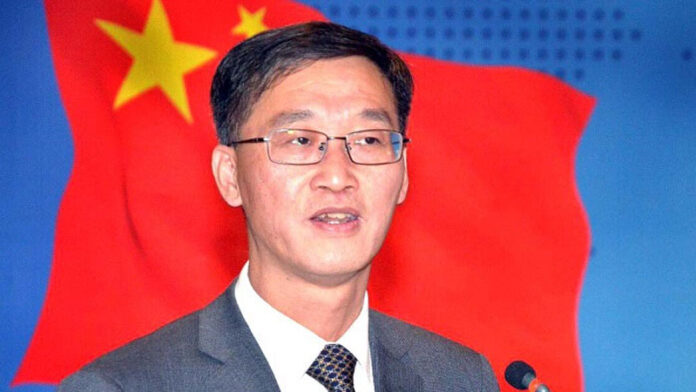 ISLAMABAD: Chinese Ambassador to Pakistan Yao Jing has said that China and Pakistan have constituted a joint committee to explore financing modalities and to find an appropriate financial package for the Main Line (ML-1) railway project.

Addressing the media late Wednesday, the envoy said that due to huge financial implication, the project was facing little delays. “However, this won’t be the case as the committee would soon finalise an appropriate financial package to fund the project.”

The Chinese embassy had arranged a reception for media persons in connection with the Chinese Lunar Year.

The ML-1 project is part of China Pakistan Economic Corridor (CPEC), under which 1,872-km railway track from Peshawar to Karachi would be upgraded at an estimated cost of around $9 billion.

Yao Jing on the occasion rejected the rumours regarding a slowdown in CPEC projects, saying that work on CPEC projects was being executed according to the plan.

“There is no mega project being executed presently, which is why it seems that the project has slowed down,” he said. “But there are a number of small projects currently being executed under the CPEC framework across the country. These may not be tangible but are very important.”

Elaborating his point, the envoy said in Gwadar alone, five main projects were being executed under CPEC, including a vocational training centre, a 200-bedded hospital, a water desalination plant, and a new state-of-the-art airport.

In social, health and education sectors, he informed the media that there were 27 projects being implemented under CPEC across the country.

The envoy pointed out that the CPEC had entered in its second stage where social, industrial and agriculture sectors would remain areas of special focus.

He said that a number of Chinese agriculture companies were coming to Pakistan to purchase more value-added agriculture products.

“As per the vision of Prime Minister Imran Khan to alleviate poverty, several villages of backward areas of the country are being made a model of poverty alleviation,” he said. “A new area – science and technology – is being included in the CPEC portfolio to produce more value-added products in the country.”

He said the Western media was against Pak-China relations, especially CPEC, adding that this propaganda must be negated via dissemination of positive and true picture by the media of both countries.