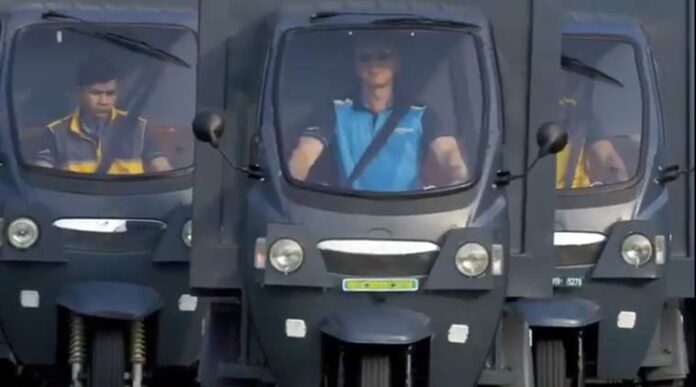 Making the announcement on Twitter, Bezos who is on a visit to India, shared a video and wrote: “Hey, India. We’re rolling out our new fleet of electric delivery rickshaws. Fully electric. Zero carbon.”

In the video, Bezos is seen driving the rickshaw, followed by scores of other drivers. The company had earlier announced an investment of $1 billion into India to “digitise” micro, small and medium enterprises.

Bezos, who founded Amazon 25 years ago, is on a visit to India at a time his company is facing an anti-trust investigation and protests from small traders across the country. Since 2015, the Confederation of All India Traders (CAIT) has waged a battle against online retailers Amazon and Walmart-controlled Flipkart, accusing them of deep discounts and flouting India’s foreign investment rules.

To woo retailers, Bezos delivered a package to a kirana store (corner store) on Saturday as part of his expanding e-commerce business. In a post on social media, Bezos said, “Amazon partners with thousands of kirana stores all over India as delivery points. It’s good for customers, and it helps the shop owners earn additional income. Got to visit one in Mumbai. Thank you, Amol, for letting me deliver a package.”

Jeff Bezos also got a cold shoulder response from the government, with no minister from the central cabinet holding a meeting with him.

Minister of Commerce and Industry Piyush Goyal also rebuked Bezos saying Amazon is not doing India “a great favour” by investing $1 billion in the country. “…They may have put in a billion dollars, but then, if they make a loss of a billion dollars every year, then they jolly well have to finance that billion dollars. So, it’s not as if they are doing a great favour to India when they invest a billion dollars,” said Goyal during a panel discussion at the Raisina Dialogue held.