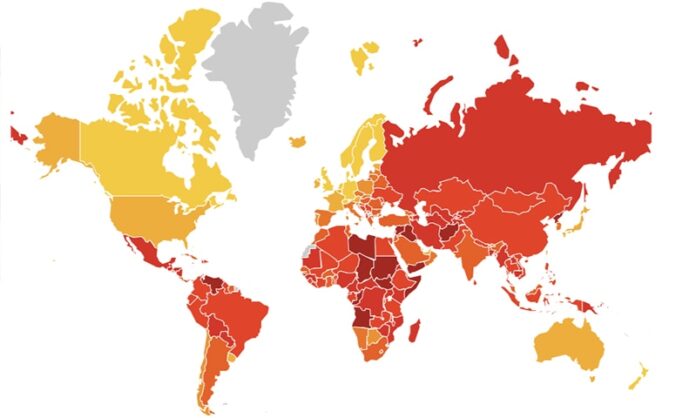 The Pakistan Tehreek-e-Insaf (PTI) government on Thursday found itself in a tight spot after global anti-corruption watchdog, Transparency International’s 2019 Corruption Perception Index (CPI) revealed that corruption increased in Pakistan in 2019, compared to the year before.

The CPI is the leading global indicator of public sector corruption. It scores and ranks countries based on how corrupt their public sector is perceived to be by experts and business leaders.

It shows that the country has been unable to curb malpractices since the year before. In 2018’s report, Pakistan ranked 117 with a score of 33, meaning that corruption has slightly increased.

The index ranks 180 countries and territories by their perceived levels of public sector corruption.

It uses a scale of zero to 100, where zero is highly corrupt and 100 is very clean. More than two-thirds of countries have scored below 50 on this year’s CPI.

The bottom countries are Somalia, South Sudan and Syria with scores of nine, 12 and 13 respectively.

Except China, none of Pakistan’s neighbouring states have improved their rankings. With an improvement of seven spots, China ranks 80 as it shares the spot with India which declined by two spots.

Muzaffar said that the National Accountability Bureau (NAB) under its present chairman has performed much better, and NAB was rejuvenated after it took various initiatives, including adopting the combined investigation team (CIT) system, in order to have collective wisdom in the conduct of inquiries or investigations on merit. NAB has collected Rs153 billion from corrupt elements and filed 530 references and its overall conviction ratio in the accountability courts is about 70 per cent, the statement noted.

Analysis shows that countries that perform well on the CPI also have stronger enforcement of campaign finance regulations and broader range of political consultation, a press release issued by Transparency International Pakistan said. Countries where campaign finance regulations are comprehensive and systematically enforced have an average score of 70 on the CPI, whereas countries where such regulations either don’t exist or are poorly enforced score an average of just 34 and 35, respectively.

“The lack of real progress against corruption in most countries is disappointing and has profound negative effects on citizens around the world,” said Patricia Moreira, Managing Director of Transparency International. “To have any chance of ending corruption and improving peoples’ lives, we must tackle the relationship between politics and big money. All citizens must be represented in decision making.”

To reduce corruption and restore trust in politics, Transparency International has called on governments to control political financing to prevent excessive money and influence in politics in addition to tackling preferential treatment to ensure budgets and public services are not driven by personal connects or bias towards special interests.

They should empower citizens, protect activists, whistleblowers and journalists, reinforce checks and balances, and promote separation of powers, the watchdog has said.

She said that the PTI government was “plundering national wealth with both hands, destroying the economy.

“PTI’s claims and slogans have proven to be false and the international body has put a stamp on Imran Khan’s incompetence and ineptness,” he said, adding that the country’s rank has dropped after a period of 10 years.

“The report is a proof that this year corruption increased in Pakistan and inflation and unemployment has unleashed miserable consequences for the public.”

The PPP leader further claimed that the report was prove that the country reversed in all sectors, and also pointed to the state’s lowered position in a report concerning the rule of law.

“In a year, Pakistan has also lagged behind in democratic values.  In a year, attacks on the media and judiciary increased and Pakistan’s rank also lowered in violation of human rights,” he said.