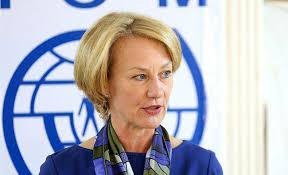 WASHINGTON: Chief US diplomat for South Asian Affairs Alice Wells has said Washington “strongly urges” Islamabad to implement its Financial Action Task Force (FATF) action plan and stressed that the requirements spelt out in the action plan have to be fulfilled.

She made the remarks during a briefing at the US Department of State on her recent trip to Pakistan. ” It is not a political process, but we certainly support and stand ready to assist Pakistan as it implements these obligations,” she said in response to a question asking if the US would respond to Foreign Minister Shah Mahmood Qureshi’s request for intervention in getting Pakistan out of the grey list. Responding to the same question, Wells noted: ” FATF is a technical process. There has been an action plan that was presented to Pakistan. It’s a question of fulfilling the requirements that have been spelt out and that are asked of all countries in the international system.”

“I welcomed efforts by Pakistan to meet its counterterrorism financing obligations under FATF … We strongly encourage Pakistan to work with FATF and the international community to fully satisfy its action plan commitments.

“Completion of the FATF action plan is critical to Pakistan’s economic reform efforts, including its IMF (International Monetary Fund) programme, as well as for demonstrating sustained and irreversible action against all militant groups based in Pakistan without distinction,” she said.

However, she added that Washington is, “pleased to see progress by Pakistan towards fulfilling FATF obligations”.

“There is a meeting underway currently in Beijing where Pakistan is presenting its actions to the task force. And so I defer to that task force to make its evaluation. But the more evidence of Pakistan’s seriousness in both documenting its economy and in shrinking the space for militants to be able to take advantage of Pakistan’s either banking system or territory, the more confidence that the international community and business community will have in working with Pakistan,” she said.

While reading out a statement at the US Department of State about her recent trip to Islamabad, Ambassador Wells said, “We have seen obvious progress in our relations with Pakistan, from the high-level engagement such as the President’s warm and constructive meeting with Prime Minister Khan at Davos to the restoration of the International Military Education and Training programmes.”

‘US seeking opportunities for investment in Pakistan’

Amb Wells, when asked what she had to say about Pakistan and China’s negative reaction to her critical comments on CPEC, clarified that it is, “Pakistan’s sovereign right to decide what investment it seeks and on what terms.”

She said that the US, as “a friend of Pakistan,” wanted to ‘advise’ Islamabad to take on investment projects that create wealth, generate employment and are sustainable and generate the greatest economic prosperity. She went as far as to offer that, “we have great options for the Pakistan market.” She was referencing a comment she had made shortly before, in which she revealed that American energy firms and manufacturers are interested in the Pakistani market. “You have Exxon-Mobil, Excelerate, Cargill, Honeywell, all pursuing major new investments. You have Uber creating 80,000 jobs for Pakistani youth,” she noted.