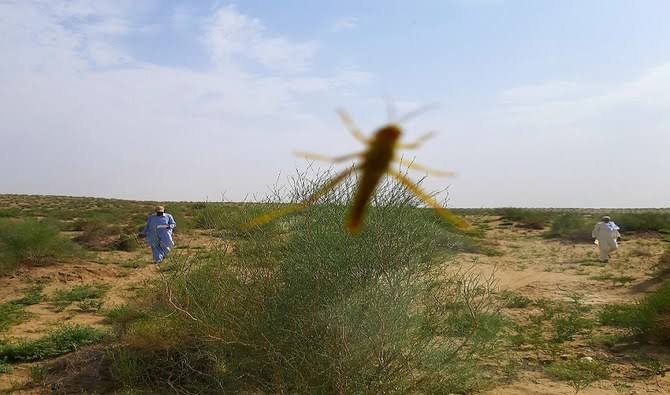 LAHORE: Amid countrywide locust attacks, farmers have approached the government for an increase in the scope of crop insurance scheme to provide them cushion against pest attacks.

In 2018, the Punjab government launched the insurance scheme to provide cover to farmers growing cotton, rice, and wheat –it was added in 2019— against floods, rain or any other calamity of sorts.

However, the policy leaves out pest attacks –a longstanding demand of farmers for protection of their crops against the locust attacks that have seen a spike over the past couple of year.

Though the scheme covers crops, like cotton and wheat, it fails to provide cover to farmers who grow mustard, which is the worst-hit by locusts.

“Crop insurance scheme is an excellent initiative, but I request the government to increase its scope as my mustard crop is badly affected by the swarms of locusts this season,” Ali Ahmad Sahu, a mustard farmer based in Lodhran lamented. His farm in Dunyapur came under a brief attack of the passing swarm, incurring huge loss to the crop.

A senior agriculture department official shared that the government was working on the expansion of the project in phases.

“The project was initiated in Lodhran, Rahim Yar Khan, Sahiwal and Sheikhupura in 2018 and was expanded to 18 districts – Multan, Muzaffargarh, Narowal, Layyah, Faisalabad, Rajanpur, Bhakkar, DG Khan, Kasur, Khanewal, Layyah, Mandi Bahauddin, Bahawalpur, Bahawalnagar and Okara – owing to its success. In the current financial year, at least 0.5 million farmers are insured at a cost of Rs1.3 billion.

The agriculture officer said that as part of this scheme government would pay 100pc premiums for the farmers having a landholding of 5 acres or less, whereas the premium payments would be shared on a 50-50 percent basis in case of landholding above 5 acres and up to 25 acres.

HOW WILL IT WORK?

At the end of the crop season, average yield will be calculated for areas under scope of the Crop Insurance Scheme by independent enumerators.

In case of shortfall in average yield of unit areas of insurance (UAIs) below a specified threshold, the insurance will be triggered and all farmers of the UAIs would be recompensed by this amount of yield shortfall.

The ultimate aim of the crop insurance scheme is to protect the farmers from large agricultural production shocks and provide them with a risk management tool to ensure higher yield without any fear of loss arising from natural or man-induced disasters,” a senior official at crop assessment department official said.

When asked whether the government would include other crops in the scheme as well, he responded that they were considering to increase the scope of the scheme to sugarcane, maize and oilseed crops, but in phases.

He added that the Pakistan Disaster Management Authority is presently evaluating the damage being done by locusts. “In the light of their finding the scope of crop insurance scheme might be increased.”