Coronavirus not to stop economic cooperation with Pakistan: China 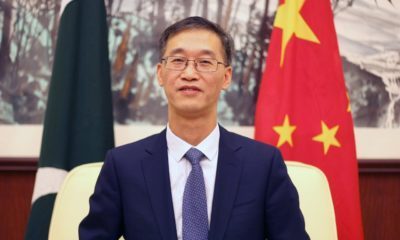 ISLAMABAD: Chinese Ambassador to Pakistan Yao Jing has said that that the coronavirus catastrophe would not stop the economic cooperation between China and Pakistan.

“We are thankful to the Pakistani government and people for showing solidarity in our difficult time which provide us strength and more confidence”, he said while addressing a special seminar titled “Six Years of Belt and Road Initiative (BRI) and China Pakistan Economic Corridor (CPEC)”.

The seminar was organised by the Sustainable Development Policy Institute (SDPI) in collaboration with Islamabad Stock Exchange (ISE).

He said that after six years of successful implementation of CPEC project under the umbrella of Belt and Road Initiative (BRI), it is now established that the CPEC and other corridors under BRI are projects of international cooperation, where 126 countries joined these projects.

He said BRI provided credible and tangible benefits to the beneficiary’s countries and the CPEC is one of the successful examples. “We are officially against the unilateralism and those against the BRI are against international cooperation,” he added.

“I am looking at CPEC in the context of historic China and Pakistan relations, where the CPEC provided new focus and new opportunities on economic front”, Yao said, adding that the CPEC under more clear and consistent policies coupled with set direction will help Pakistan in the long term.

With respect to a question of the high cost of electricity from power projects developed under CPEC, the ambassador said that the agreed tariff were according to the market rate and it was now the responsibility of the government to pass on those agreed rates to the consumers.

On the occasion, National Assembly Speaker Asad Qaiser said that CPEC is a backbone of our economy amid critical economic challenges of the country.

Terming CPEC a fortune change of the country, he said through knowledge sharing and technology transfer, we were hopeful that Pakistan would soon get out of the current economic quagmire.

On coronavirus outbreak in China, Asad said that through all thick and thin China always helped Pakistan and in this catastrophe of coronavirus, despites concerns, the government and people of Pakistan would be standing with China and would provide all out support in their difficult times.

Asad expressed the need for creating and converting the CPEC committee into a think tank and asked SDPI’s support in this regard. He also invited the business community and think tanks for economic policy inputs.

Executive Director SDPI Dr Abid Qaiyum Suleri said that six years back when CPEC started, in Pakistan, the power system was crippled, as there was a regular pattern of two hours power outage and now one can see the difference only due to the CPEC investment in energy sector.

He said there were some myths that were associated with the CPEC such as China’s CPEC model was new colonialism and Pakistan would be full of Chinese workers and dominance, another myth was that Pakistan would fall in debt trap Gwadar was a strategic project and not a commercial project.

To cope with these global challenges, the world, especially the developing countries, needs projects like the CPEC and BRI which aim at improving regional integration, increasing trade and stimulating economic growth.

President, Islamabad Stock Exchange (ISE) Zahid Latif Khan said that the CPEC is the most successfully implemented project under BRI. The governments of China and Pakistan are expanding its scope in global value chain, social sector development, blue economy etc, which will provide the gateways for the business to grow.