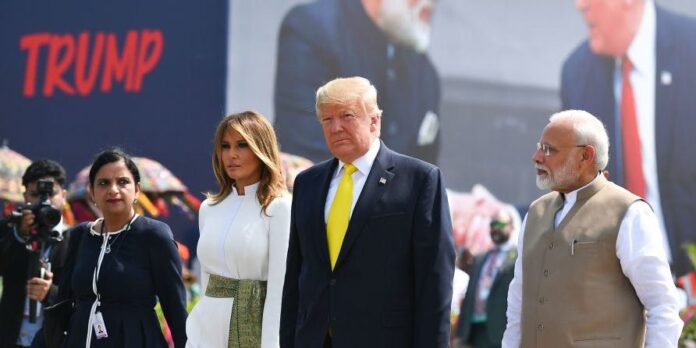 AHMEDABAD: United States (US) President Donald Trump on Monday appreciated Pakistan’s efforts for peace and expressed hope for a reduction in tensions in the region, as he announced that his country will sign military deals worth more than $3 billion with India on Tuesday.

Addressing a packed rally in Ahmedabad after his arrival in India, Trump said that the US has a very good relationship with Pakistan. “US and India are committed to stopping terrorists and fight their ideology. For this reason, since taking office, my administration is working in a very positive way with Pakistan to crack down on terrorist organisations and militants which operate on the Pakistani border,” he said.

“Our relationship with Pakistan is a very good one. Thanks to these efforts, we are beginning to see signs of big progress with Pakistan and we are hopeful for reduced tensions, greater stability and the future of harmony for all of the nations of South Asia,” said Trump on the first day of his whirlwind 36-hour visit meant to reaffirm US-India ties.

More than 100,000 people packed into the world’s largest cricket stadium, giving Trump the biggest rally crowd of his political career, for the pinnacle of the day’s trio of presidential photo-ops. The boisterous scene featured soldiers on camels, a mix of songs from Bollywood hits and Trump’s campaign rally playlist, including an Elton John hit that seemed to puzzle most of the crowd. Trump basked in the raucous reception that has eluded him on many foreign trips, some of which have featured massive protests and icy handshakes from world leaders.

Nearly everyone in the newly constructed stadium in Ahmedabad in western India sported a white cap with the name of the event, “Namaste, Trump” or “Welcome, Trump”, and roared for the introductions of both Trump and India’s Prime Minister Narendra Modi.

Trump opened his speech by declaring that he traveled 8,000 miles to deliver the message that “America loves India, America respects India and America will always be faithful and loyal friends to the Indian people”.

Perhaps alluding to tough negotiations over trade, Trump lightheartedly told the rally crowd, “Everybody loves him, but I will tell you this. He’s very tough.”

The two nations are closely allied, in part to act as a bulwark against the rising influence of nearby China, but trade tensions between the two countries have escalated since the Trump administration imposed tariffs on steel and aluminum from India. India responded with higher penalties on agricultural goods and restrictions on US medical devices. The US retaliated by removing India from a decades-old preferential trade programme.

Making a sales pitch for US military equipment, Trump said,” We make the greatest weapons ever made. Airplanes. Missiles. Rockets. Ships. We make the best and we’re dealing now with India. But this includes advanced air-defense systems and armed and unarmed aerial vehicles.”

The State Department has also approved a potential sale to India of $1.8 billion in arms, including air-defense radars and missiles, rifles and other equipment, the US Defense Security Cooperation Agency announced.

Trump also reiterated his pledge that the US would make a significant trade deal with India.

“We are in the early stages of discussion for an incredible trade agreement to reduce barriers of investment between the United States and India,” he said. “And I am optimistic that, working together, the prime minister and I can reach a fantastic deal that’s good and even great for both of our countries.”

Trump gave no time line for a deal and speaking to reporters later he said he was in “no rush.”

Officials have tried to hammer out a modest trade deal opening up India to US agricultural products and medical devices in return for the restoration of preferential export status that Trump stripped from India in 2019.

“There has been comparatively less activity during President Trump’s first term so it’s important for the two sides to get a win in the arms sales arena, particularly since the trade deal that’s been under negotiations for over a year appears to be off the table for now,” Jeff M. Smith, research fellow at the Washington D.C.-based Heritage Foundation’s Asian Studies Center.

There was no mention by Trump of the protests enveloping India over its Citizenship Amendment Act, which provides a fast track to naturalisation for some migrants who entered the country illegally while fleeing religious persecution but excludes Muslims. The passage has raised fears that the country is moving toward a religious citizenship test and prompted large-scale protests and a violent crackdown.