KARACHI: As the number of coronavirus cases rose outside China, oil slid more than five per cent at its session low on Monday, falling into bear market territory, amidst fear regarding a slowdown in the global economy.

With the virus still present in China- the world largest importer and consumer of oil- and  dampened oil demand, WTI, Brent and Arab light went down by 15.8pc, 16.3pc and 14.5pc respectively in the last two months or so.

As the situation is getting worse with the outbreak spreading across South Korea, Italy, Iran, Afghanistan, and Israel, the Organisation of the Oil Exporting Countries (OPEC) has lowered its oil demand by 230,000 bpd, while the US Energy Information Administration revised down its forecast regarding global oil demand by 378,000 bpd. 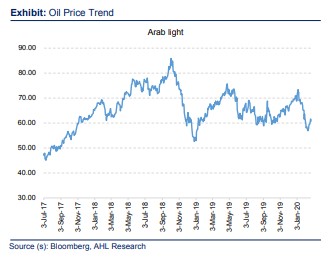 With all eyes on the OPEC+, Adnan Sheikh AVP Research at Pak Kuwait Investment Management Company said, “OPEC may have underestimated the impact of coronavirus in their initial estimates of reduction in demand by 230k bpd for 2020. Given that both IEA and IEA have estimated much larger numbers, we will have to wait and see how OPEC+ responds in terms of additional cuts”

Until last week, crude oil prices received support over expectations that OPEC and its allies could implement further supply cuts when they meet in early March. However there is an air of uncertainty regarding Russia agreeing to such a plan.

In a report on Coronavirus’ impact on oil prices, Tahir Abbas from Arif Habib Limited said, “We believe oil prices in the short term will be dependent on the virus updates from China including new registered cases and death tolls. Moreover, the spread of the virus to other countries and measures for combat are also expected to influence oil prices.”

As per the report, lower oil prices bear positive news for the macro-economy as it will lead to lower inflationary pressure and may result in monetary easing.

Abbas further quantifies that for every $5/bbl decrease in oil price, our base case inflation (11.6pc for FY20) will be contained by 23 bps. As for global policy rates, decline in oil prices holds the potential to push for a wave of monetary easing which could be seen as positive for Pakistan as it could raise Eurobond and Sukuks from the international markets.

As for trade, Abbas says for every $5/bbl downward movement in oil prices, there will be an annualized impact of around $1.1 billion on Pakistani imports, which may lead to further reduction in current account deficit (CAD). 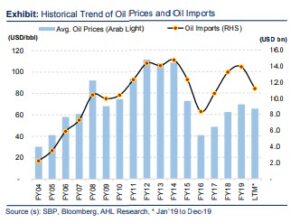 KASB Securities Managing Director Arsalan Soomro said Pakistan imported $14 billion worth of energy imports and that a $10 decline would lead to $2-2.5bn/saving per year. “Thus it gives cushion to your currency and improves your foreign exchange reserves.”

As per Hamza Kamal, an analyst at AKD Securities, “The government may also take this opportunity to jack up revenue from petroleum as done in the past in 2015-2016s.”

The downward movement in oil prices is being seen as negative for the exploration and production (E&P) sector.

Tahir Abbas says the earnings of local E&P companies would be hit between 2 to 7pc on an annualized basis. “Oil marketing companies are likely to witness a one-time inventory loss, while refineries are likely to witness inventory losses which may be offset by an increase in margins owing to the possibility of crude oil prices declining more than final product prices.”

Hamza Kamal added that from industrial perspective, many captive power plants had shifted from gas to furnace oil (FO) recently. “If oil price continues to remain under pressure, power production by these plants on FO would become more attractive.”

However, there is consensus among analysts that declining oil prices will have positive impact on the power, cement and steel sectors as lower fuel costs and furnace oil costs can prop up profitability.

Shahrukh Saleem, an investment analyst at AKD Securities, was of the view that declining oil prices would result in a decrease in the cost of captive power generation for some players in the cement sector.

In addition, it is expected that the automobile sector would witness better margins considering how steel prices are declining alongside oil prices, added.

In addition, as on a whole, KASB’s Soomro believed, “The private sector’s cost of production comes down in the form of cheaper fuel/LNG rates and transportation costs thereby, increasing their profitability and creating space for repayment of loan and giving rise to expansionary plans.

For the masses, it’s a quick transfer of wealth in reduced fuel expenses, gas and utilities expenses and is a feel-good factor in the purchasing power.”

Analysts believe that the impact of coronavirus on crude oil demand could be limited.

Saudi Aramaco Chief Executive Officer Amin Nasser, while speaking to Reuters, said, “We think this is short term and I am confident that in the second half of the year there is going to be an improvement on the demand side, especially from China.”

Meanwhile, oil recovered some of its losses on Tuesday after a biggest drop witnessed over the past seven weeks as investors attempted to gauge the impact the virus would have on the economy, along with the response that was likely to be triggered by producers.