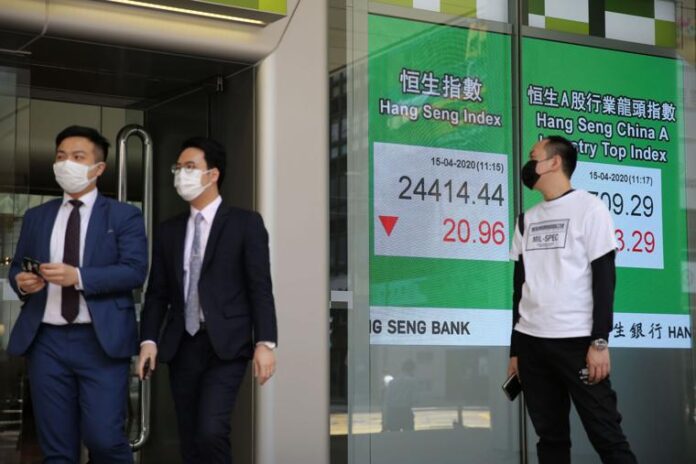 Global stocks and oil prices tumbled Wednesday after the International Monetary Fund said the world’s economy will suffer its worst year since the Great Depression of the 1930s due to the coronavirus pandemic.

Indexes in London and Frankfurt were down about 2% and benchmarks in Shanghai, Tokyo, Hong Kong and Sydney closed lower. Wall Street futures were down by over 1.5%.

The price of oil hit a new 18-year low the International Energy Agency said demand will drop by 9.3 million barrels per day in 2020 overall. Demand in April will hit its lowest since 1995, it said.

The drop came despite an agreement over the weekend among OPEC and other oil producers to cut output to reflect collapsing demand.

The IMF said this year’s global economic output will shrink by 3%, a bigger loss than 2009′s 0.1% decline during the financial crisis. That was a sharp reverse from the Fund’s January forecast of 3.3% growth before the virus prompted governments to shut down factories, travel and other industries.

The IMF’s chief economist, Gita Gopinath, said the loss to global gross domestic product, the broadest gauge of economic output, could amount to $9 trillion, or more than the economies of Germany and Japan combined.

On Wall Street, the future for both the benchmark S&P 500 and the Dow industrials sank 1.6%.

Investors are focusing on how and when authorities may begin to ease business shutdowns and limits on people’s movements imposed to slow the spread of the coronavirus.

U.S. President Donald Trump has been discussing how to roll back federal social distancing recommendations. U.S. governors are collaborating on plans to reopen their economies in what is likely to be a gradual process to prevent the coronavirus from rebounding.

The discussions follow signs the outbreak may be leveling off in some of the hardest-hit areas, including New York City.

In Italy, Spain and other places around Europe where infections and deaths have begun stabilizing, the process of reopening economies is already underway. Some businesses and industries are being allowed to reopen in a calibrated effort to balance public health and their countries’ economic well-being.

The IMF expects economic contractions this year of 5.9% in the United States, 7.5% in the 19 European countries that share the euro currency, 5.2% in Japan and 6.5% in the United Kingdom. The Fund said China, where the pandemic originated, should eke out 1.2% growth this year, better than some private sector forecasters who expect little to no growth in the world’s second-biggest economy.

China has reopened factories, shops and other businesses after declaring victory over the outbreak but forecasters say it will take months for industries to return to normal output, while exporters will face depressed global demand.

Wall Street expects profits will fall for most companies in the S&P 500. The focus is on what management teams have to say about what profits look like for the rest of the year.

Analysts are forecasting a drop of roughly 10% in earnings per share for S&P 500 companies for the first quarter and 21% for the second quarter.