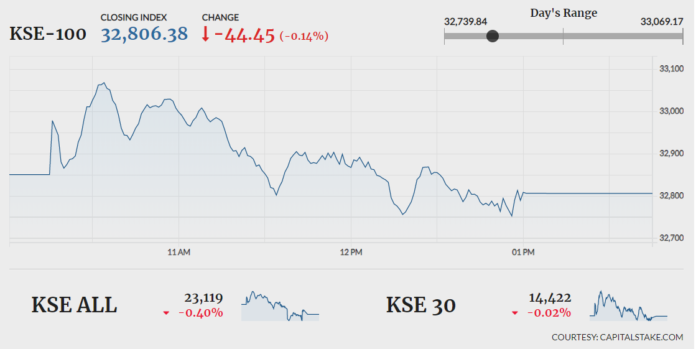 KARACHI: The Pakistan Stock Exchange (PSX) moved in a narrow range on Friday, with the benchmark KSE-100 Index failing to capitalise on early gains and ending slightly lower.

On the economic front, Pakistan’s current account deficit fell by 99pc to $6 million in March 2020, as against $823 million in March 2019. Meanwhile, the country’s overall liquid foreign exchange reserves inched lower by 0.78pc; net reserves with commercial banks were up 1.43pc.

In a notification to the exchange, the Board of Directors of Nimir Industrial Chemicals Ltd (NICL -0.20pc) announced an investment of Rs1.6 billion to expand the capacity of its caustic soda plant to 120 tonnes per day, which was earlier planned to be expanded to 50TPD.

Moreover, the Board of Directors of Thal Limited (THALL +4.23pc) passed a resolution to amalgamate its wholly owned subsidiary, A-One Enterprises (Pvt) Ltd, into THALL, with completion date of June 30, 2020.

Trade timings at the exchange during the holy month of Ramadan will be 10am to 2:45pm from Monday to Thursday, and till 1:45pm on Fridays.

- Advertisement -
Facebook
Twitter
Linkedin
WhatsApp
Email
Previous articleNICL to invest Rs1.6b for expansion of caustic soda plant
Next articleHSBC to push on with overhaul ‘wherever possible’ despite crisis