US manufacturing activity plunges to 11-year low as orders sink 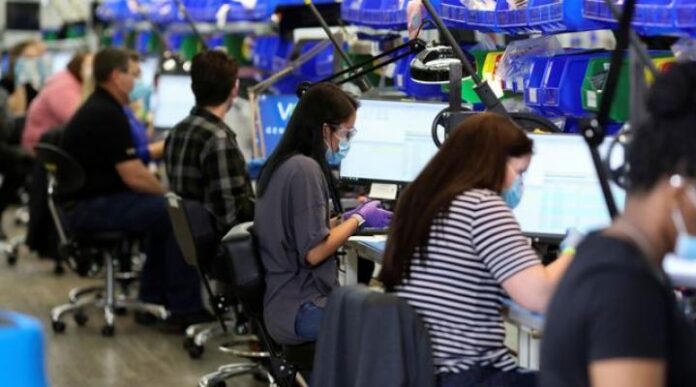 WASHINGTON: US manufacturing activity plunged to an 11-year low in April as the novel coronavirus wreaked havoc on supply chains, suggesting the economy was sinking deeper into recession.

The survey from the Institute for Supply Management (ISM) on Friday added to a raft of grim data this week, including a collapse in consumer spending in March and a surge to 30.3 million in the number of Americans who have filed claims for unemployment benefits in the last six weeks.

Strict measures to slow the spread of COVID-19, the respiratory illness caused by the coronavirus, have almost paralyzed the country, leading to the deepest economic contraction since the Great Recession in the first quarter.

“The backdrop for manufacturers is very bleak, with collapsing global demand, ongoing supply chain disruptions, and high levels of uncertainty all posing very significant challenges,” said Oren Klachkin, lead US economist at Oxford Economics in New York. “We do not expect output losses to be recouped until 2021.”

The ISM said its index of national factory activity dropped to a reading of 41.5 last month, the lowest level since April 2009, from 49.1 in March. The monthly decline in the ISM index was the biggest since October 2008. A reading below 50 indicates contraction in the manufacturing sector, which accounts for 11pc of the US economy.

Economists polled by Reuters had forecast the index would fall to 36.9 in April. The smaller-than-expected drop in the ISM index was attributable to a surge in the survey’s measure of supplier deliveries to a reading of 76.0 last month from 65.0 in March.

A lengthening in suppliers’ delivery times is normally associated with a strong economy and increased customer demand, which would be a positive contribution. But in this case slower supplier deliveries indicate supply shortages related to the coronavirus pandemic, and not stronger demand.

Even with some parts of the country starting to reopen, economists do not expect a rapid reversal in the economic downturn, with some small businesses expected to go under. There is also a risk of a second wave of COVID-19 infections.

Stocks on Wall Street were trading lower amid the rising tide of weak economic reports and President Donald Trump’s threats to slap new tariffs on China over the coronavirus crisis. The dollar was slightly lower against a basket of currencies, while US Treasury prices fell.

Last month’s decrease in the ISM index pulled it below the 42.8 threshold. A reading above this level over a long period of time is associated with economic expansion.

The rule of thumb in many countries is to define a recession as two consecutive quarters of decline in real gross domestic product, but the National Bureau of Economic Research, the private research institute regarded as the arbiter of U.S. recessions, does not use that definition.

Instead, it looks for a decline in economic activity, spread across the economy and lasting more than a few months.

“The ISM manufacturing survey has come late to the recession forecasting party this time, as this recession is the quickest deterioration in economic activity ever recorded,” said Chris Rupkey, chief economist at MUFG in New York.

The ISM said comments from manufacturers were “strongly negative regarding the near-term outlook, with sentiment clearly impacted by the coronavirus pandemic and continuing energy market recession.” COVID-19 lockdowns have weighed on demand for oil, sending crude prices crashing.

The ISM’s forward-looking new orders sub-index tumbled to a reading of 27.1 in April, the lowest since December 2008, from 42.2 in March. The monthly decline was the largest since April 1951. Out of the 18 industries, only manufacturers of paper and food, beverage and tobacco products reported increases in orders. This is consistent with shortages of some foodstuffs and paper products like toilet paper.

The survey’s measure of order backlogs at factories plummeted to 37.8 last month from 45.9 in March.

With orders collapsing, manufacturers slashed payrolls last month. The ISM’s factory employment index plunged to a reading of 27.5 last month, the lowest since February 1949, from 43.8 in March. The monthly decrease in the employment measure was the largest since the ISM started tracking the series in 1948.

This fits in with economists’ expectations that the government’s closely watched employment report next Friday will show a record more than 20 million people lost their jobs in April, with the unemployment rate blowing past the post-World War Two record of 10.8% touched in November 1982.

In March the jobless rate shot up 0.9 percentage point, the largest monthly change since January 1975, to 4.4pc.

A separate report from the Commerce Department on Friday showed construction spending rebounded 0.9pc in March, with gains in private and public outlays, after declining 2.5pc in February. The report, however, likely does not fully capture the coronavirus-related business closures and disruptions that swept through the country beginning in mid-March.