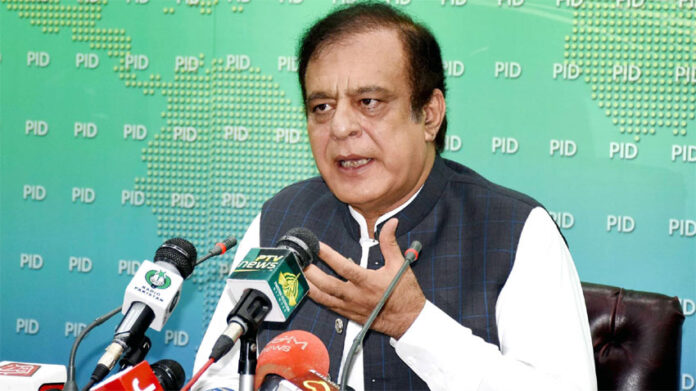 ISLAMABAD: Information and Broadcasting Minister Senator Shibli Faraz said on Friday the federal government adopted the concept of smart lockdown under the vision of Prime Minister Imran Khan to protect daily wagers and labourers from the impacts of coronavirus.

The country could not afford a complete lockdown due to the economic situation and even the developed states were also opting for the smart lockdown to keep their economic wheels running, he added.

Addressing his maiden news conference after assuming charge of the office, the information minister said now there was a realization on the importance of striking a balance between the lockdown and revival of economic activities to save the vulnerable segments of the society from hunger and starvation.

The strategy was being finalized for reopening of the industrial sector, he said, appealing to the people related to the industries to take precautionary measures. The prime minister wanted that the lockdown should be eased to some extent so that the country’s economy could grow, he added.

Shibli Faraz said the welfare of workers and labourers had always remained the topmost priority of the government. Even before the coronavirus outbreak, their welfare was the main focus of the government’s planning under the vision of Prime Minister Imran Khan.

The government announced a Rs 200 billion package under the Ehsaas Cash Emergency Programme, under which Rs 12,000 were being distributed among every deserving family, including the labourers, he added.

He said the prime minister took the steps for the betterment of workers and the homeless by opening shelter homes and soup kitchen.

To a question, the minister said consultations with the opposition for finalizing standard operating procedures to summon the session of parliament were in advanced stage.

The government wanted holding the sessions of both the National Assembly and the Senate, but it was vital to adopt precautionary measures in the given situation when NA Speaker Asad Qaiser had been diagnosed with the coronavirus.

He said it was important to call the sessions of two houses of the parliament as approval of certain bills, which were going to lapse, was necessary.

The opposition was a part and parcel of the political system and the government welcomed its constructive criticism which proved helpful in improving the standard of governance and transparency. The opposition should play its role within the realm of democratic norms and values, he remarked.

As regard the situation in Indian Occupied Kashmir, the information minister said the government had effectively highlighted the lingering dispute at the world forums, including the United Nations. Prime Minister Imran Khan had raised his voice regarding Kashmir on all relevant forums and his speech in the General Assembly on the issue had become part of the history.

Replying to a question, Shibli Faraz said it was the prime minister’s prerogative to change his team members keeping in view the situation and interest of the country. He expressed the commitment to transform the Information Ministry as per the modern requirements, and enhance its outreach to project the national interests and the country’s image.