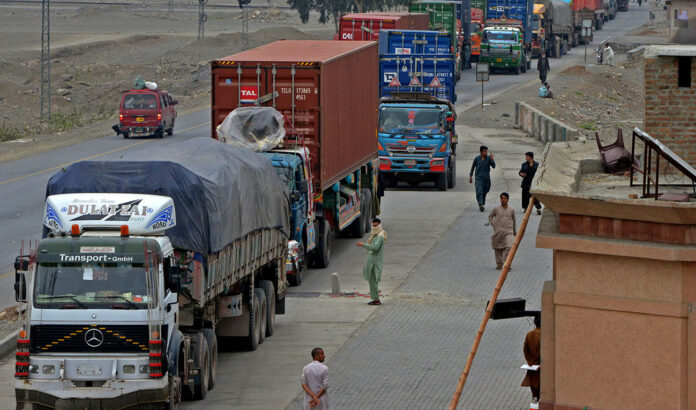 PESHAWAR: Pakistan is gradually losing its trade share in Afghanistan, mainly because of administrative issues related to commerce, consignment handling facilities and closures of crossing points due to political issues as well as lack of facilities at the borders.

According to a report released last month by the International Organization for Trading Economics, Pakistan’s export volume with Afghanistan during the first 11 months of the last fiscal year (FY2019-20) declined by 33.40pc to $8.82 billion, as against $10.11 billion during the same period of last year.

On the other hand, Pakistan’s imports from Afghanistan were recorded at $579.53 million during the period under review, of which the share of fruits and vegetables was $175.25 million and $155.14 million, respectively. Besides, Pakistan had spent $91.14 million on minerals’ import, $57.87 million on cotton and $32.78 million on iron and steel products.

Talking to this scribe, Wafa Jan, an Afghan trader, said in line with the rest of the world, Pak-Afghan trade was also dented badly by coronavirus outbreak and subsequent lockdowns. Although Pak-Afghan border points have now been opened, trade activities remain very slow, mainly due to the lack of facilities at the crossing points, he added.

“Lack of arrangements and regular delays in the clearance of goods have forced the Afghan traders to shift to Iranians ports,” he said. “However, if proper facilities are provided and bottlenecks are removed, trade between the two countries could be enhanced up to $5 billion.”

He urged Pakistani authorities to reduce goods’ clearance time by improving border management. “The biggest problem currently being faced by Afghan importers is that they are not receiving their goods on time, which is why they are being forced to look towards alternative options.”

Pakistan is Afghanistan’s biggest trading partner. The country’s main exports to its western neighbour included wheat, cement, sugar, vegetables, marble, ghee, rice etc. However, despite years of efforts, the menace of smuggling and illegal trade between the two countries could not be curtailed.

Talking to Profit, Frontier Customs Agents Association President Ziaul Haq Sarhadi said that the trade volume would not increase until the Afghanistan-bound containers were cleared in due time, adding that effective arrangements should be made at crossing points by further strengthening all the departments through the provision of latest machinery.

Sarhadi warned that if the current situation continued, Pak-Afghan trade would be reduced to zero.

“There was a time when trade volume between the two countries was $2.5 billion, but it gradually declined over the years, and the coronavirus pandemic has now played a major role in further reducing the trade volume, as the border crossing points remained closed for almost three months,” he stated.