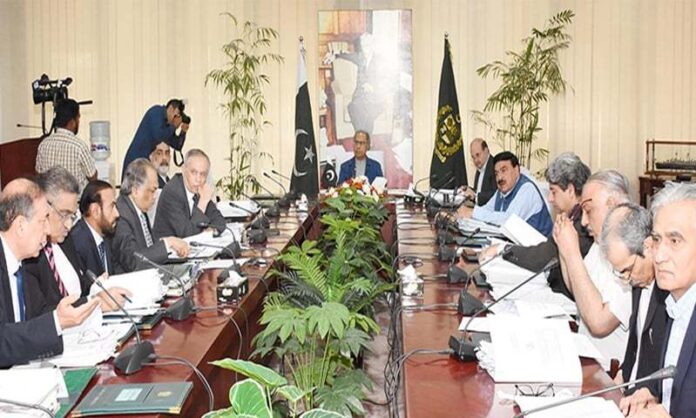 ISLAMABAD: The Economic Coordination Committee (ECC) has allowed the Trading Corporation of Pakistan (TCP) to place an import order of 200,000 tonnes of wheat, following the import of 500,000 tonnes of the same by the private sector.

The ECC meeting, chaired by Adviser to Prime Minister on Finance and Revenue Dr Abdul Hafeez Shaikh, gave the TCP a go-ahead for the import of 200,000 tonnes of wheat for PASSCO after the Ministry of National Food Security and Research Secretary Omar Hamid Khan informed that 500,000 tonnes of wheat were also being imported by the private sector, and that the first shipment was scheduled to reach the country’s port on 26th August 2020.

It was observed that the arrival of 700,000 tonnes of wheat in the next couple of months would help defuse price volatility, overcome the shortage and discourage hoarding of this essential commodity in the country.

The ECC tasked the National Food Security & Research secretary and Economic Affairs Minister Makhdoom Khusro Bakhtiar to consult with the provincial governments whether they would like to purchase any amount of wheat at the rates offered to TCP by global suppliers since global wheat prices generally remain on the lower side in the months of July and August.

The commodity would be imported in a staggered manner to fetch the best price as well as to save the carrying cost and meet the shortage as and when required.

It was noted that wheat stocks to the tune of 26.05 million tonnes, including 25.457 million tonnes from fresh wheat and 0.602 million from the carry forward stocks, were currently available in the country, reflecting a shortfall of 1.411 million tonnes.

The availability of wheat stocks in the public sector was reported at 6.32 million tonnes compared to 7.55 million tonnes during the corresponding period last year.

Meanwhile, the ECC also took up a proposal for the import of sugar through private importers in view of the fast depleting stocks of sugar, which currently stood at 1.2 million tonnes but were likely to exhaust by early November 2020. The committee decided to reduce the levy of sales tax and other duties on the import of sugar by the private importers so as to keep the landed cost at the lowest possible level and to ensure a fair and affordable price to the consumers.

According to Industry and Production Minister Hammad Azhar, the ECC has ratified the proposal to reduce and remove the incidence of taxes on sugar at the import stage. “This will facilitate private sector importers, improve domestic stocks and stabilize prices.”

The withholding taxes at import has reduced from 5.5pc to 0.25pc. Similarly, value-added tax at import minimized has been lowered to zero per cent from 3pc, while sales tax has been reduced from 17pc to 1pc.

“The above will be time and quantity bound. The details will be notified shortly and TCP has also been asked to re-tender for sugar with modified conditions within one week,” the minister stated.

Moreover, the ECC took up the issue of waiver of demurrage charges on Afghan Transit Trade cargo stranded at Karachi ports. The committee asked the Ministry of Maritime Affairs to discuss the issue with port authorities and terminal operators for its amicable resolution.

As per the sources, the Ministry of Maritimes Affairs has proposed to waive demurrage charges, worth Rs397 million, of around 24,000 standard containers. These have been struck from March 24 to July 21, 2020, due to the corona-led closure of the border. The Pakistan-Afghanistan Parliamentary Group had proposed in its second meeting to waive off these charges.

On a proposal submitted by the Ministry of Energy (Petroleum Division), the ECC took up the issue of Jamshoro Joint Venture Limited’s expired agreement with Sui Southern Gas Company Limited (SSGC) and gave principled approval for resumption of LPG/NGL and production from the JJVL plant under proposed conditions subject to their endorsement from the Office of Attorney General.

The rationale behind the decision was to reduce the import of LPG when domestic production was possible.

The committee also discussed and approved a proposal by the Finance Division for fixation of dividend on SBP shares and allowed the bank to provide dividend at the rate of 10pc on the face value of SBP shares in the bank’s annual accounts for the year ended 30th June 2020.