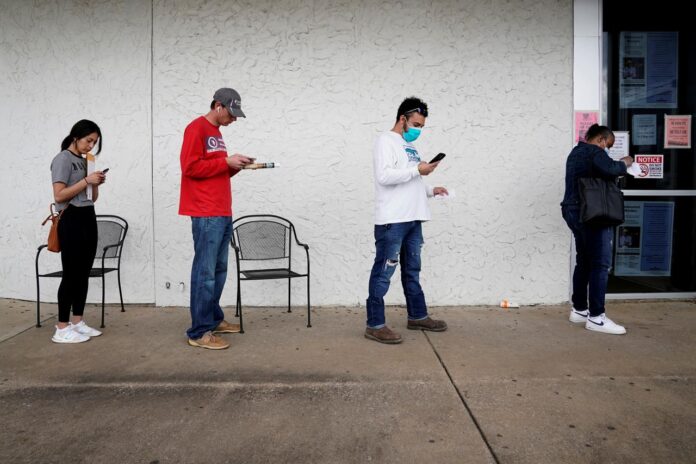 WASHINGTON: The number of Americans filing new claims for unemployment benefits hovered at high levels last week, strengthening views that the labour market was settling into a more gradual path of recovery from the Covid-19 pandemic.

Initial claims for state unemployment benefits totalled a seasonally adjusted 884,000 for the week ended Sept. 5, matching the number of applications received in the prior week, the Labor Department said on Thursday. Economists polled by Reuters had forecast 846,000 applications in the latest week.

Though claims have dropped from a record 6.867 million at the end of March, layoffs persist across industries as many companies have exhausted loans from the government to help with wages and the coronavirus lingers. A weekly unemployment supplement, credited for the sharp rebound in economic activity, starting with record retail sales growth in May, lapsed in July.

Airlines, including United Airlines and American Airlines have announced furloughs and job cuts. There have also been layoffs at oilfield services and equipment companies.

Economists believe the labour market could take years to return to its pre-pandemic levels and are urging the White House and Congress to restart stalled negotiations for another rescue package amid a setback in the quest for a vaccine.

AstraZeneca has paused global trials of its experimental coronavirus vaccine, which has been described by the World Health Organisation (WHO) as probably the world’s leading candidate and the most advanced in terms of development, after an unexplained illness in a participant.

The government reported last week that the economy created 1.371 million jobs in August after adding 1.734 million in July. About 10.6 million of the 22.2 million jobs lost at the depth of the coronavirus crisis have been recovered.