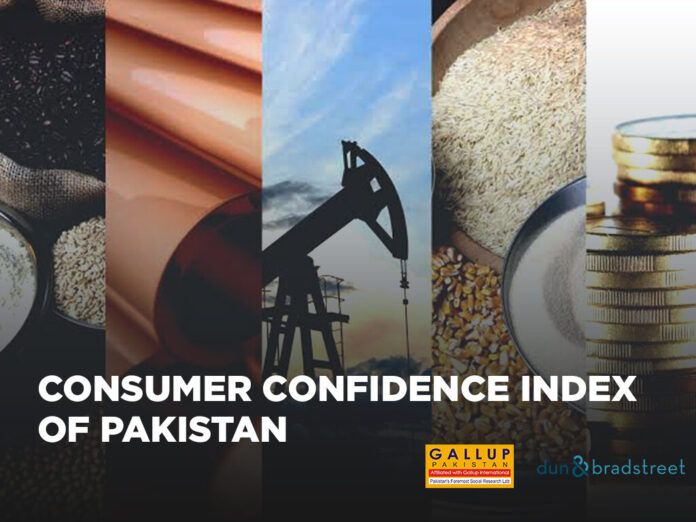 The index is a reflection of the current situation and future expectations, which would take into account the economic changes felt by consumers across the country during the last 6 and next 6 months.

The CCI ranges from 0 to 200, with 100 as the neutral value and a score of less than 100 indicating pessimism.

He continued, “I envision this index to become a barometer of economic well-being in the country in the years to come. We hope this report is useful to government entities, as well as private organisations to strengthen their understanding of consumer sentiments across Pakistan and help in developing effective strategies to deal with the on-ground situation.”

On the other hand, Gallup Pakistan Executive Director (ED) Bilal Ijaz Gilani said, “Consumer confidence in Pakistan has shown an upward trajectory for the third quarter in a row which shows that the pandemic’s impact on the economy and consumers is slowly tapering off. Gallup Pakistan foresees two main threats to this recovery trend, unemployment and inflation.”

Gilani warned that many of the recent wins may be lost if these two problems are not effectively tackled. “Now is the time for fiscal and monetary policy instruments for public welfare.”

It may be mentioned that perceptions about the country’s economy have improved consistently across the three quarters, highlighting upbeat consumer sentiments mainly on account of optimistic future expectations.

Similarly, perception about household financial situation entered into green, implying that people’s household income seems to be rising after a decline due to Covid-19.

During 3Q2020, the household financial situation was the only parameter to turn overall optimistic owing to an improvement in future expectations. As many as 30pc of consumers believe that their income levels will improve in the next six months in Q3 as compared to 28pc in Q2 and 32pc in Q1.

Consequently, 2 out of 3 (66pc) respondents cited a decline in household savings over the last six months compared to 64pc in Q2 and 57pc in Q1.

On the whole, consumers across all provinces, urban and rural locations, different age groups and genders were relatively more optimistic for future economic situations, than they were during the Q2 survey.