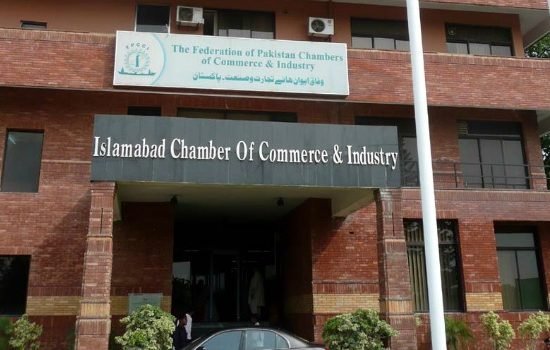 ISLAMABAD: The Islamabad Chamber of Commerce & Industry (ICCI) has called upon the government to withdraw amendments to tax laws introduced through an ordinance to meet the conditions of International Monetary Fund (IMF) “as it would prove to be a fatal blow to businesses and investment and may cause a collapse in the overall economy”.

ICCI President Sardar Yasir Ilyas Khan noted that amendments to tax laws envisaged withdrawal of tax exemptions of Rs140 billion from various sectors, besides imposition of fine of Rs5,000 on shop owners for not displaying NTN or business cards and another fine of Rs5,000 for not filing of tax returns or wealth statements. He said that these amendments have created a lot of concerns in the business community as they would give more powers to FBR officers and create an environment of harassment for the business community.

He said that at the one hand, the prime minister is focusing on elimination of direct interaction between taxpayers and tax collectors through promotion of automation in FBR systems, but on the other hand, bureaucracy is introducing amendments in tax laws that would thwart the vision and intentions of the PM for policy reforms in FBR.

Khan further said that the prime minister had announced an attractive package for the construction industry due to which mega construction projects have started across the country. However, now the government has unilaterally registered all tax returns-filing real estate dealers as Designated Non-Financial Business and Professions (DNFBPs) under pressure from FATF requirements and directed them to provide full details of their clients and property transactions by completing a four-page questionnaire within 7 days.

He said that this move would discourage new investment in the construction sector and kill the construction package of the prime minister. He urged that such anti-business and anti-investment measures should be withdrawn to save the economy from plunging into deep troubles.

The ICCI president said that the government is preparing to put an additional burden of more than Rs700 billion on the power consumers by granting more autonomy to NEPRA. He said that such autonomy to NEPRA would make energy costs unviable for businesses and industries as a result of which a large number of businesses and industries would face closure.