From landing costs to margins of hospitals, AGP explains what makes the Russian vaccine expensive in Pakistan 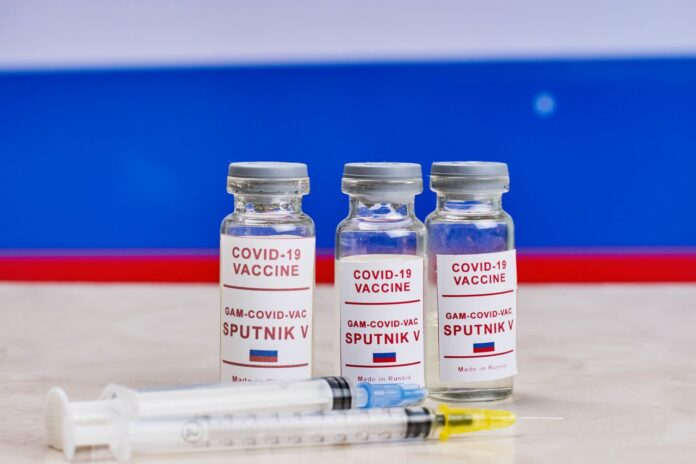 Drugs in Pakistan mean controversy and this is evident yet again with the commercial launch of the Russian Sputnik-V Covid-19 vaccine that has been made available by Karachi-based AGP Limited for private sales. The controversy this time is about the high price of the vaccine, currently priced at Rs12,268 (approximately $80), which is 300% higher than the global price of Sputnik-V which is being sold at $20 for two doses.

The Drug Regulatory Authority of Pakistan (DRAP) authorised AGP Limited to be the first company to import and introduce Sputnik-V vaccine in Pakistan for private sales. AGP was allowed to import Russian Sputnik-V vaccine in February this year and received its first shipment of 50,000 vaccines on March 17. But like all things drugs and drug companies, Sputnik-V and AGP have also not remained untouched by controversy.

Drug pricing is a controversial subject in Pakistan because drug prices are fixed by the government that focuses more on the affordability of the drug than profits pharmaceutical companies can earn by selling these drugs. In the case of Sputnik-V as well, the controversy began when the government had approved importing the vaccine without setting a maximum price of the drug, deciding only later to fix the maximum price.

The government had initially fixed the sale price of the vaccine at around $55 (Rs8,449) for two jabs. Transparency International Pakistan (TIP), in a letter to the prime minister, objected to the price set by the government, noting that it was too high because globally, the Sputnik V vaccine was priced at $20 for two doses. While TIP objected that the price was too high, AGP Ltd. grumbled that the price set by the government was too low for it to be commercially feasible.

Subsequently, the company, AGP Ltd. took the government of Pakistan to Sindh High Court. The court decided to immediately allow private sales of the Sputnik-V vaccine at the price of Rs12,268, as recommended by the company

However, according to AGP Ltd., the vaccine is priced higher considering the supply chain and distribution constraints. While most vaccines have to be stored at 2-8 degrees Celsius, the Sputnik vaccine needs to be stored and transported at -18 degrees Celsius and that comes with a higher cost. The product is frozen and then is later converted for usage.

An official from AGP said the vaccine is specially packaged in dry ice which keeps it in required temperatures for 72 hours. There are also data loggers in the package that monitor the drug from the manufacturer to the destination. As Profit has learnt, the shipment from the manufacturer of each vaccine comes through global logistics company DHL, which has an agreement globally with all the vaccine manufacturers for special handling. All of the companies use special containers and packages with data loggers to monitor the temperature throughout the supply chain.

It eventually makes the landed cost of the drug $45 which is roughly Rs 6,900, according to the company. Following that, there is a 40% margin build up on the drug that is distributed among the storage facilities, related taxes, logistics and distribution and the margin for the importer. On top of the 40%, 15% of the margin goes to healthcare facilities, like hospitals, alone that administer the vaccine, whereas 6-7% is taken by the government in form of taxes. Therefore, according to the company, the only way to make the vaccine commercially feasible is if it is priced at Rs 12,268. 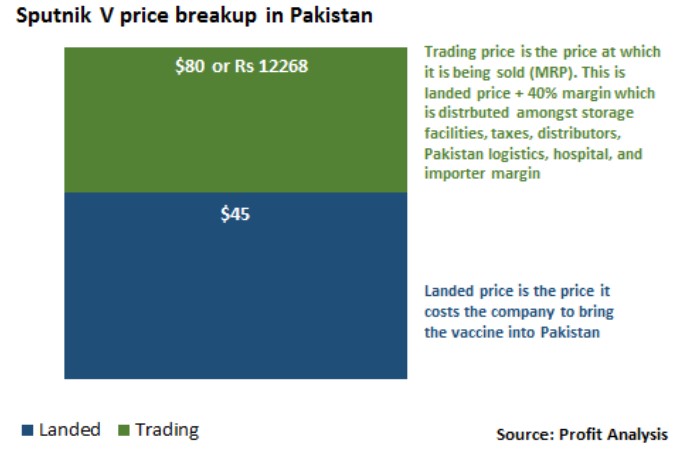 Private vaccination of Sputnik-V has started and continues at select healthcare facilities. And while the vaccination drive continues, citizens on social media have complained of hospitals charging higher than the price set. However, that has reportedly been rectified as the hospitals were reminded that the retail price of the vaccine was Rs12,268, inclusive of their margins.

The government has registered some hospitals in the country where Sputnik-V vaccines are available. For instance, some of the places you can get vaccinated at are South City Hospital, Ziauddin Hospital, AKUH, and OMI Hospital in Karachi; Doctors Hospital, Chughtai Lab and Shaukat Khanum Hospital in Lahore; and Shifa Hospital in Islamabad.

SEARLE to enter the competition with Chinese vaccine

In a recent development in the Covid-19 private vaccine market, SEARLE pharmaceutical made its intentions of entering the market known. In a notice to the Pakistan Stock Exchange (PSX) dated April 1, 2021 (not an April Fool’s joke), SEARLE announced that it had signed an exclusive licensing and supply agreement with the Chinese Livzon Pharma Group for the recombinant novel coronavirus vaccine called V-01. The agreement is important considering this also provides SEARLE the license to manufacture in Pakistan.

Following the successful completion of Phase-III trials, the company will seek emergency authorisation from DRAP to initially import finished products, followed by manufacturing the drug locally under a technology transfer from Livzon Pharma Group in China.

Though SEARLE intends to sell both to the government and to the private sector, cost estimates are not known yet. A company source, however, said that because of the technology used in manufacturing and the nature of the drug itself, manufacturing efficiency would be possible, hinting that the V-01 vaccine might be available at a cheaper rate.

The controversy surrounding drug prices will continue as long as the government decides at what price a drug is going to be sold. It has been a long-running demand of the pharmaceutical industry that the government should allow market forces to determine the drug prices.

But we have DRAP that is fixing the prices which means price controversy around drugs will continue. We also have Covid-19 which means circumstances are extraordinary and as things are happening, private vaccination can help avoidable controversies such as those of elite privilege. There have been virulent pictures, videos and debates online about how the well-connected skip queues and get themselves and their families vaccinated. Unlike instances where people had cheated the system to get vaccinated by the government despite being ineligible, private vaccination allows them to pay for it and avoid any controversies. While it can be asserted that the pricing makes the vaccine beyond the reach of an average Pakistani, it allows the privileged to vaccinate themselves without being a burden on the already financially burdened government.

However, if someone does not have the means to spend on the vaccine but has the patience to wait, the government will provide the vaccine free of charge. The timeline, however, cannot be determined exactly as of now.