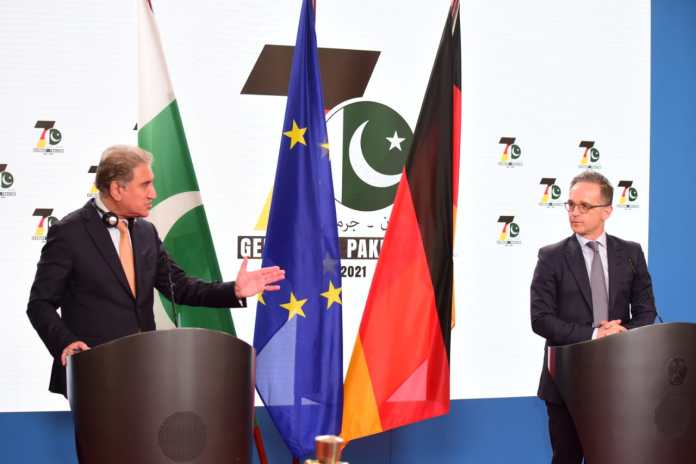 The German foreign minister termed the Qureshi’s visit a good opportunity for launching new German initiatives and projects in Pakistan.

Maas expressed satisfaction over the interest of 35 German companies ready to invest in Pakistan and added that the encouraging trend would help tap into immense business potential.

“Germany wanted to build up cooperation with Pakistan.” he said, adding that constructive discussions were held on diverse matters to further this aim.

Foreign Minister Qureshi welcomed the plans of new German investment in Pakistan and highlighted that the country’s shift in policy from geopolitics to geoeconomics could turn out to be a great opportunity for German companies.

“Incentives announced by the Pakistan government for foreign investors would make the country a hub of regional trade,” Qureshi said, emphasising that Pakistan wanted to deepen, broaden and transform its economic relations with Germany.

He said Pakistan could benefit from Germany in technology transfer and the projects relating to supply and production of electric vehicles in line with the government’s policy of safe and green climate.

He lauded Germany’s supportive role in helping Pakistan achieve GSP Plus status in the European Union (EU) and for not allowing the politicising of the Financial Action Task Force (FATF).

Qureshi also expressed gratitude to Germany for committing to supply 50 million doses of Covid-19 by May and mentioned that Pakistan as a population of 220 million would require more doses in the future.

He said German Chancellor, Angela Merkel, did a great job in the development of Germany, adding that Prime Minister (PM) Imran Khan was keen to visit Germany.

Speaking to the media later, Qureshi mentioned that his meeting with his German counterpart also took up ways to overcome delays in visa issuance.