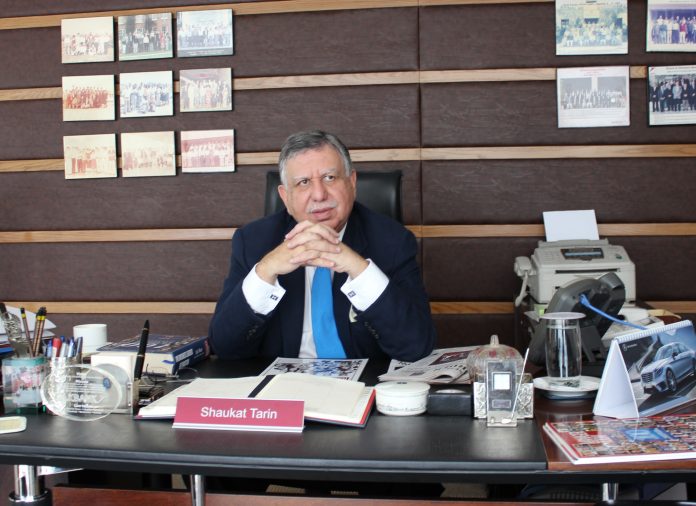 ISLAMABAD: Finance Minister Shaukat Tarin has said the government is planning to boost spending on large infrastructure projects by as much as 40 per cent to create jobs and foster productivity in an economy crippled by the ongoing Covid-19 pandemic.

In an interview with Bloomberg in Islamabad, Tarin said that the federal government will earmark as much as Rs900 billion ($6 billion) for development expenditure in the year beginning July.

He added that the economy needs to expand by 5 per cent next year.

“That’s the bare minimum we need for a country this size,” said Tarin, who is due to present a new budget next month. “There is almost 110 million youth.”

He also served in the role between 2008 and 2010, helping the nation avoid default by securing a bailout from the International Monetary Fund. He came into office as Pakistan faced a third wave of coronavirus cases, prompting authorities to order a week-long shutdown that might weigh on economic activity and hurt incomes.

Tarin’s plan would reverse his predecessor’s decision to lower spending to narrow the budget deficit, which he estimated to be a little above seven percent of gross domestic product in the current fiscal year through June, against 8.1 per cent in the previous year, Bloomberg reported.

The federal finance minister said he expected the deficit in the next fiscal to be 1 or 1.5 percentage points lower.

While balancing the budget would be key for Pakistan’s current US $ six billion loan program with the International Monetary Fund (IMF), the new finance minister is negotiating with the organization for more wriggle room to support economic growth.

The report highlighted that the government’s Gross Development Product (GDP) target for next year was a percentage point higher than the IMF’s four per cent projection, and Tarin was seeking to boost growth to six per cent in the year after, it said.

“We need 2 million jobs every year,” he said. “If we do not go into growth mode, we will have a major crisis on the streets.”

The central bank, which has cut interest rates to a three-year low to support the economy, has been on pause mode for a while and has left some of the heavy lifting to the government.

“First we have to get more revenues,” Tarin said, adding that he was targeting about six trillion rupees next year in tax authority revenue, compared with this year’s 4.75
trillion-rupee target.

“Unless we get more revenues, forget about any incentives to boost the economy.”

On talks with the IMF, he said, “All we are saying is that we are just basically going to give them alternate ways of achieving the same objective” including revenue generation and reducing energy debt, adding, “the aim is for this to be the last IMF bailout in
Pakistan’s history.”

Tarin said that his government planned to tap undrawn allocated funds from Asian Development Bank (ADB) and World Bank (WB) that total $20 billion, adding that it also aimed to increase tech exports to $8 billion in two years, from an estimated $2 billion this fiscal year, a sector he said he aimed to support.