A recap of how one humorous meme got sold for thousands of dollars, what NFTs are, how they work, and where Pakistan fits in? 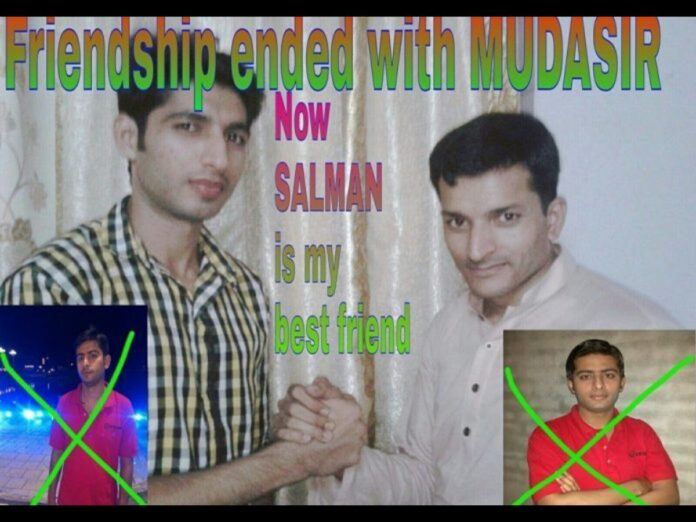 On August of 1st, Muhammad Asif Raza went live on Facebook, as he sat with both new best friend Salman Ahmad Naqsh and ex-friend Mudassir Ismail Ahmad, huddled side by side on a couch as the meme they created back in 2015 got auctioned and sold for 20 ETH. Converting the amount into dollars makes it equivalent to $49,000 or PKR 7,898,800. Gratitude was in the air as the three actual friends expressed their love to supporters of the meme watching the live stream.

The “friendship ended with Mudassir” meme is embedded as part of modern Pakistani internet culture and for all the unusual reasons. The quirkiness of the message typed in WordArt and green colored cross on the friend, a symbol marking an end of a friendship. A perfectly imperfect MS-Paint job generated seismic-level buzz that broke the internet.

The meme went viral first in the global south and as it reached western shores, it became a worldwide sensation. Considering the appeal of memes within Gen-Z and Millennial circles, mixed with their relatively higher buying power, it only made sense to put up the most popular meme to come out of Pakistan as an NFT.

For the uninitiated, an NFT stands for Non-fungible tokens. Here ‘non-fungible’ means unique or one-of-a-kind. Imagine trading a rare Pikachu Pokemon card for a Wasim Akram collectible card from back in the day, is a non-fungible transaction since both cards are different and vary in value. A fungible transaction would be if one currency is used interchangeably to get a good of equivalent value. What makes NFTs unique is that tokens are assigned an internet address; that is never used more than once.

An art piece is ‘minted’ when the creator uploads the content after paying a processing fee to the marketplace. It’s like buying a plot of land, but think digital. If you ask what artifacts could be defined as an NFT, it could be a number of things and as I list them, they progressively get stranger — Fine art, digital collectible cards, music, memes, tweets or even crypto-kitties are all valid examples that have been sold. Most of these are hosted on the Ethereum Blockchain, the platform of choice for many marketplaces such as Foundation, Open Sea and Rarible where artists and creators can sell to the highest bidder.

In conversation with one of the co-founders of Alter; the team behind the successful auction of the ‘Friendship with Mudasir’ NFT, narrated the journey from acquiring an invite to the immensely exclusive Foundation App, to reaching out to Asif, enabling them to mint the meme and put it on auction.

‘Building a strategy to promote the NFT involved considerable effort, but the reward was worth it and gave us a big push to continue contributing to this space’ said the co-founder. Through this success, Alter is currently working with multiple creators and digital artists in emerging economies and beyond with the plan to become the partner of choice to help launch and promote artwork on the blockchain.

Inspired by the CryptoPunks; considered as the pre-cursor to NFTs, Matt Hall and John Watkinson of Larva Labs generated a collection of 10,000 unique funky-looking characters through a computer script that they started as an art project back in 2017. The characters are 24 x 24 pixel-art pieces and debate is ongoing on how they are challenging the concept of ‘ownership’ in the digital art market. Each cryptopunk has a track history of past owners. To-date, the highest sold value is of ‘Punk #7804’ for ETH 4200, worth $7.57 Million at the time. The cheapest one is available for 51.85 ETH or $165,929.

While on the topic, knowing that internet users can make copies of the image, what allows these nifty pieces of art to still retain their value? One podcast host gave an excellent analogy of taking Andy Warhol’s famous artwork of the Campbell Soup Can whose worth is at $11 million. Its value is based on three factors: 1) Proof of creation; where Warhol is the original creator, 2) Proof of scarcity; that only one original piece exists and 3) Proof of ownership; currently owned by the Museum of Modern art (MOMA).

The art can be sold to many but it really only has one official owner. With that being said, when digital art is minted, a similar mechanism is applied where information like the internet address and owner ID among other details gets linked to the blockchain. The economics around the tokens is hard to determine, considering NFTs are getting sold in the hundreds to millions of dollars in the marketplace. One thing is for sure that anyone owning at least one NFT attains a form of social status fitting for what people are dubbing as the Web 3.0 era. NFT owners who use Twitter are seen putting up their display pictures as one of the punks, apes or kittens which many would find this strange but people within the crypto and NFT space consider it as a flex. 2021 is already an exciting time where technology is moving in the direction of the ‘metaverse’ and NFTs are a big part of this movement.

How can more creators in Pakistan reap the benefits of this movement? It starts with the artists, animators, meme creators or even musicians —as long as folks who are willing to share their craft on a platform or work with an intermediary to get it minted, the sky’s the limit.

Hamza Mahmood
Hamza Mahmood is a solutions consultant at Voiant, and writes deep-dive essays on the Pakistani tech ecosystem on Takhleeq. His Twitter handle is @mahmooyo