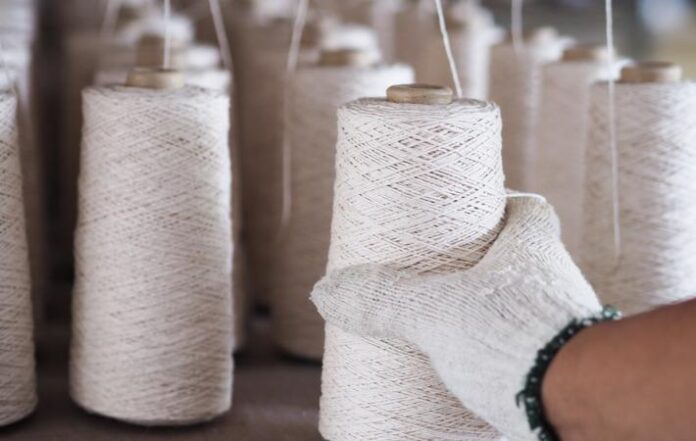 Cotton prices have fallen by Rs200 to 300 per maund in Pakistan, local media reported on Thursday.

According to the quoting the Pakistan Cotton Ginners Association (PCGA), the prices of cotton have dropped in both Punjab and Sindh and is currently being sold at Rs13,900 per maund and Rs13,700 per maund, respectively.

The PCGA chairman said that the downward trend is being witnessed due to recession in the international markets.

Earlier in February, the Pakistan Cotton Ginners Association (PCGA) in a report had warned of a shortage, saying that the country’s cotton production fell by 34.35 per cent to 5.571 million bales up to Jan 31 against 8.487m bales produced in the same period of last year.

Commenting on the shortfall of 2.9 million bales and the dire situation, textile industry representatives said poor productivity could erode viability of the export-oriented textile sector, which has 55 to 60pc contribution in overall exports of the country as figures showed that it was the lowest cotton production in 30 years.

Low cotton productivity and ban on cross-border cotton import has pushed up prices of cotton yarn and textile exporters are forced to pay higher prices for raw material.

In April, the federal government had decided against allowing the import of cotton and sugar from India.

“We will not trade with India till India restores the pre-August 5, 2019 status of Indian Illegally Occupied Jammu and Kashmir. Our principled position is that there will be no trade with India without resolving the Kashmir issue,” Prime Minister Imran Khan had said.

Then minister for finance, Hammad Azhar, had said that there are alternative options for sugar and cotton imports.

Soon after, Bloomberg in a report had pointed out that the shortage could push up import bills and further hurt the fragile economy of Pakistan which is one of the world’s largest cotton producers but finding it increasingly hard to meet its own needs.

Years of bad weather, pest outbreaks and better margins on other crops have hurt the quality and quantity of harvest. And the scale of damage is accelerating: production in the current fiscal year is set to tumble to the lowest level in about three decades.

As a result, the country is spending billions of dollars to import record amounts of cotton to feed its textile industry, something it can ill afford to do. Its current account — which posted a rare surplus between July and December — has recently flipped back into a deficit amid higher imports. The move also threatens to boost cotton prices, which have already hit a seven-year high.