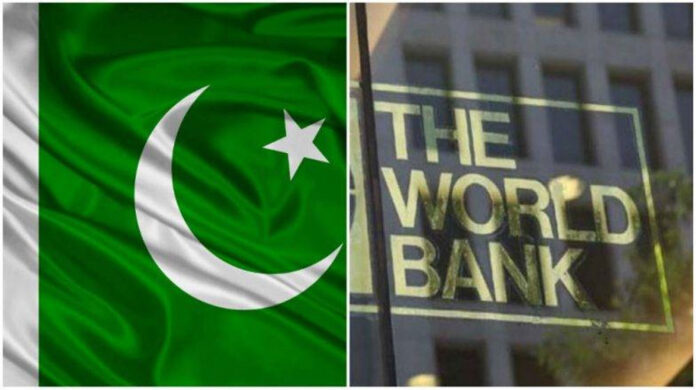 ISLAMABAD: The government on Friday rejected the World Bank’s projection about Pakistan’s Gross Domestic Product (GDP) growth rate for current and upcoming fiscal year saying it was based on unrealistic assessment and that the GDP growth rate for fiscal year 2021-22 would go up close to 5% against the WB’s forecast of 3.4%.

However, LSM growth was provisionally taken as 9.3 % in NA for estimating GDP growth 3.94%. LSM data is available with two months lag and the recent data released by PBS on LSM recorded growth of 15.2 % for FY 2021, a statement issued by the finance ministry said.

“After incorporating latest available information, the GDP growth in FY2021 will improve further above 3.94% as compared to 3.5% estimates by the World Bank,” the statement said.

For FY2022, WB projection of 3.4 % for GDP growth is again underestimated. It is pertinent to mention that economy of Pakistan has shown V shaped recovery in FY2021 without creating any external and internal imbalances. The government is committed to ensure that the growth momentum remains intact with macroeconomic stability. Thus, it is expected that GDP growth for FY 2022 will remain close to 5 %.

In this context it is worth mentioning that Global GDP growth rate in 2020 was recorded at -3.2% and is projected to grow by 6.0% and 4.9% in 2021 and 2022 respectively.
On the basis of fast recovery expected globally, especially Pakistan’s main trading partners, we expect it will be translated to domestic economy as well.

Within industry, LSM recorded a growth of 2.3 % in Jul, FY2022. Due to the closure of industrial activities during holidays in Eid-ul-Adha and monsoon rains which spread over 15 days.

To further boost the industrial sector, government is taking all possible measures like Special package for construction sector; relief measures in form of tax exemptions to automobile, Special Economic Zones, Special Technology Zones, special facilitation for SMEs in form of risk sharing in collateral free lending, sales tax concessions to cottage industry, concessional rate of refinance schemes include EFS and LTFF, special electricity tariffs for industrial use, making CPEC the platform where industries will be relocated, reduction in tax on textile products and tax relief to oil refineries so that they could turn to Euro-5 fuel.

These measures will help in significant growth in industry.

Overall the commodity producing sector will perform better and its spill over impact would be realized on the services sector.

The current data for June 2021 shows that YoY growth in Assets remained 18.9 %. Further an increasing trend is seen in both Advances and Deposits of Banks.

Thus services sector is projected to continue its growth on account of better performance of agriculture, industry and financial sector. Further, mass vaccination of general public will also have significant impact on the recovery of other private services in particular and services in general.

With regard to pressure on external accounts, it is pertinent to mention that the economy is in recovery phase, growing economy and exports require import of capital goods which leads to increase in imports.

Due to government policies, exports of goods and services will maintain its trend on average $3 billion/month and remittances $2.5 billion/month, taking into account the other secondary and primary income flows, trade deficit and current account will remain in sustainable range.

Moreover, SBP is proactively taking measures to curb non-essential and luxury imports and other foreign exchange regulatory measures for the sustainability of external sector.

Regarding inflation, it is to mention that the present government has taken various policy initiatives, administrative actions, and relief packages to control the inflationary pressure which has been mainly derived from global market commodity prices.

The higher international food prices were transmitted to countries, net importers of food. But due to prudent and pro poor measures taken by the government of Pakistan, proportionate rise of the commodities i.e sugar, palm oil, soybean oil, wheat and crude oil was not passed on the domestic consumers.

Government is also expanding the network of Sasta Bazars and Utility Stores outlets for provision of smooth supply of daily use items. National Price Monitoring Committee (NPMC) and District Price Control Committees are actively monitoring the prices of essential items all over the country to ensure their availability at reasonable prices. Government is also committed to establish USC outlets all across the country in order to provide relief to common man.

In this regard, USC was already directed to establish USC outlets in Balochistan. All these measures will help to contain the inflationary pressure in the country.

In order to ensure the smooth supply of essential food items and to reduce the inflationary pressures, the government is building strategic reserves.

In addition, government’s agriculture facilitation measures and encouraging performance of major and minor crops will further ease out the inflationary pressures as it will further increase supply of food items in the market.

It is important to mention here that the prices in international market are on declining trend during the month of September 2021 compared to August 2021 i.e. Sugar 0.0%, Soybean oil -2.4% and Wheat -4.6% which augur well for domestic prices of the country.
With regard to crude oil prices, Energy Information Administration (EIA), US expect Brent prices will remain around $70/b during the fourth quarter of 2021 (4Q21).

In 2022, we expect that growth in production from OPEC+, U.S. tight oil, and other non-OPEC countries will outpace slowing growth in global oil consumption and contribute to Brent prices declining to an annual average of $66/b.

Thus, based on government proactive policies to reduce the inflationary pressure together with government’s growth oriented policies, we expect that Pakistan will achieve growth target with price stability.