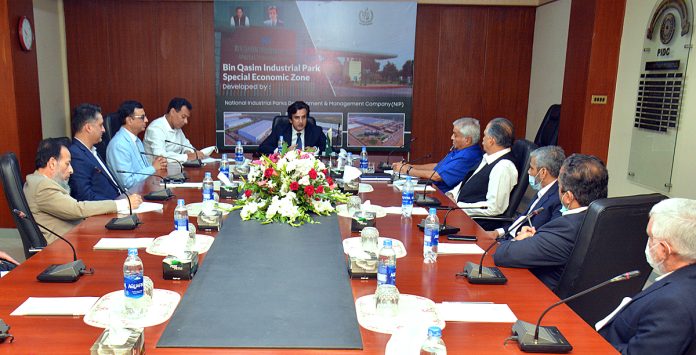 KARACHI: Federal Minister for Industries and Production Makhdum Khusro Bakhtiar on Friday said that a comprehensive steel policy would soon be rolled out with the consultation of stakeholders of steel sector for which a two-member team had been nominated from Pakistan Association of Large Steel Producers (PALSP).

The federal minister was chairing a consultative meeting on the country’s steel policy with leading steel industry players at the office of Pakistan Industrial Development Corporation (PIDC). He was accompanied by the PIDC CEO Rizwan Bhatti.

Bakhtiar said that once policy was finalised, it would help the government resolve all issues being faced by stakeholders of the steel industry and asked them to extend all kinds of support in drafting the policy so that suggestions of all stakeholders could be incorporated.

The minister further informed steel industrialists that the federal government was planning to develop approximately 7,500 acres of land in steel mills’ area as cluster-based Special Economic Zones (SEZs) through PIDC.

He asked the sector to explore options to set up a captive power plant to meet power needs at a lower cost.

The first phase of the upcoming project on 1,500 acres, for which government has allocated Rs7 billion PSDP funding, will allow the government land to be allotted on a low upfront cost for the industries with remaining payments to be made in 5-7 years easy installments on a pay-as-you-earn model, he said.

The meeting was told that with the current economic growth trajectory, Pakistan will need 30 million tonnes of long and flat steel products in the next 5 years. Besides, various aspects of tariff structure, land cost, and energy requirements of the sector came under discussion in the meeting.

Representing PALSP, Chairman Amreli Steels Abbas Akbar Ali emphasised the need for at least a 10-year policy so that the sector could make investments with confidence.

The minister said that the government took notice of the slow pace of colonisation of SEZs in the country and discovered that most of the developers were unable to cater to the energy needs of the industry, which has been stifling the growth of industrialization in their zones for decades.

“The PTI government, for the first time, intervened to provide PSDP funding for the energy supply projects of the SEZs and has allocated Rs22 billion for the SEZ energy projects since 2019,” he informed.

Speaking on the occasion, PIDC CEO Rizwan Bhatti said that since the release of government funding for the grid, NIP had received numerous allotment applications.

He shared that in the last week alone, the SEZ committee has made allotments to 14 applicants for 70 acres land with Rs13 billion expected investment and 3,700 new job opportunities.

He also added that in line with SME Policy, in order to accommodate smaller enterprises, 100 acres land at BQIP has been allocated for plots having a size of 1 Kanal and upwards.

Later, Khusro Bakhtyar was joined by Sindh Governor Imran Ismail at PIDC in a virtual ground breaking ceremony of a federal government funded 132KV grid at a cost of Rs1.5 billion for Bin Qasim Industrial Park (BQIP) – an SEZ developed by National Parks Development and Management Company (NIP), which is a subsidiary company of PIDC.