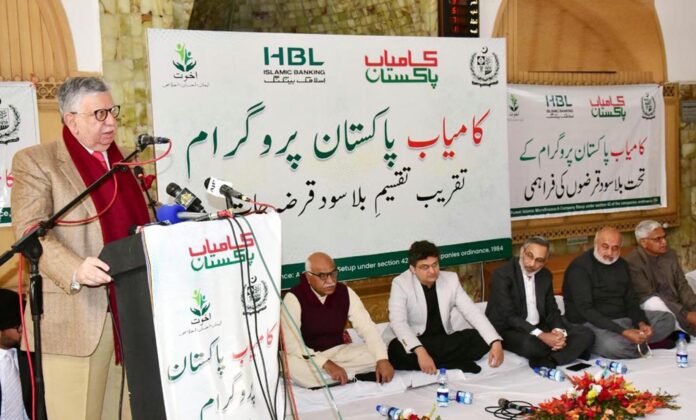 ISLAMABAD: Federal Minister for Finance and Revenue Shaukat Tarin said on Thursday that four million households will be provided financial support initially under the Kamyab Pakistan Programme and this number will be extended to six million and then seven million households.

Addressing a ceremony for disbursement of interest-free loans under the Kamyab Pakistan Programme, Tarin said that the incumbent government had laid the foundation of a welfare state to ensure that the country’s underprivileged segment does not suffer and has opportunities available to earn a respectable livelihood for themselves.

“The foundation of a welfare state has been laid. This is a big day for the poor,” the federal minister said, adding that through this programme the low-income segment of the society will become prosperous.

Tarin said that the country’s poor had always been shown dreams of food, clothing and shelter and were forced to believe that a trickle-down effect of a growing economy will have an impact on them too. However, the minister lamented that even after 74 years of Pakistan’s inception this did not happen.

He said that the prime minister has urged for Kamyab Pakistan Programme, so that the underprivileged segment would get opportunities to earn respectable livelihood for themselves without their self-respect being hurt.

The finance minister said that under the Kamyab Pakistan Programme big banks would lend to microfinance banks, which would in turn provide loans to deserving people on retail basis.

Likewise, households will be provided with loans up to Rs500,000 for setting up a business, and Rs2 million to Rs2.5 million for building a house.

He added that loans were being provided purely on merit basis and with complete transparency.

He also appreciated all the stakeholders, small and large banks, for making Kamyab Pakistan Programme successful within a short span of time.

Meanwhile, speaking on the occasion, Akhuwat Islamic Microfinance (AIM) Founder and Chairman Dr Amjad Saqib said that no other scheme in Asia provides an interest-free loan to low-income people.

He said that Akhuwat Islamic Microfinance has disbursed 2,600 loans amounting to Rs400 million so far.

During the ceremony, AIM disbursed 415 loans worth Rs60 million whereas under the programme 600 loans worth Rs90 million were distributed across Pakistan on December 30, 2021.